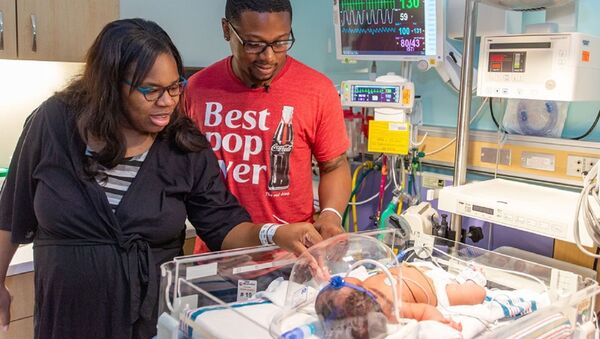 9/11 is a tragic day for the United States, but for a couple from Tennessee, this year's 11 September was filled with mixed emotions as well as bizarre numeric enigmas.

A US couple from Germantown, Tennessee had a pleasant and somewhat mind-boggling surprise on an otherwise mournful day as their daughter drew her first breath on 11 September 2019 at 9:11 pm weighing 9 pounds and 11 ounces, according to Methodist Le Bonheur Germantown Hospital, where the girls was delivered.

The parents of the little Christina Malone-Brown said that their baby managed to add joy to this sad day that was so drastic and still hurt.

The girl was reportedly born healthy and will be able to go home soon.

On 11 September 2001, a group of 19 al-Qaeda*-linked terrorists hijacked four passenger jets before crashing them into the twin towers of the World Trade Centre in New York, leading to their complete collapse, and the Pentagon in Virginia. Another plane crashed into a field on its way to Washington after passengers sought to prevent the terrorists from flying it towards their desired destination. The tragedy claimed the lives of almost 3,000 people.