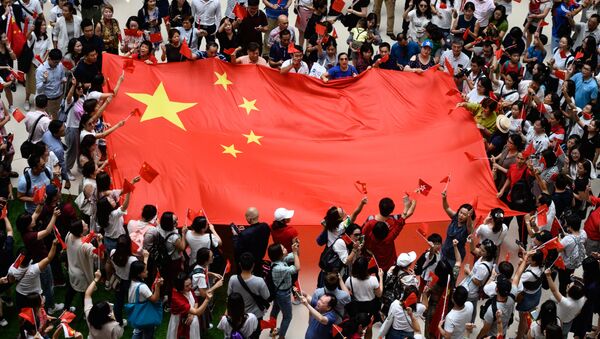 Massive protests have swept over Hong Kong since early June, sparked by a proposed bill that would have allowed for the extradition of suspects to mainland China. Pro-government groups have slammed the rallies, claiming that such large-scale disruption in all areas of business will inflict great damage to Hong Kong's international reputation.

Supporters of the Chinese government are flocking at the International Finance Centre in Hong Kong on 14 September to oppose the anti-government demonstrators.

The protests turned violent as the two opposing groups of demonstrators started shouting insults at each other, which led to clashes. The police arrived at the scene later to separate the two groups. Several people have been injured as a result of the brawl.

The mass protests in Hong Kong initially started in early June as a reaction to proposed amendments to the city's legislation that would allow extradition to mainland China. The city’s chief executive, Carrie Lam, has since declared the bill to be "dead" although according to protesters it has not been officially scrubbed from the record.
Protesters are demanding that the offensive bill officially be withdrawn.