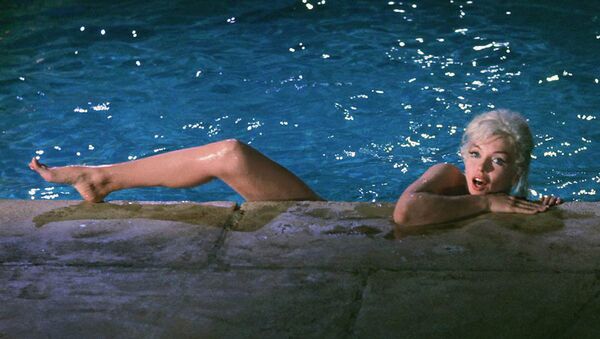 © Photo : Lawrence Schiller
Subscribe
The final episode of Fox’s documentary that looks into the circumstances of the death of the world-famous actress is scheduled for airing this Sunday.

Conspiracy theories about Marilyn Monroe’s death did not appear by word of mouth; they were deliberately designed and launched by a very concrete group of people, claims Donald McGovern, the author of ‘Murder Orthodoxies: A Non-Conspiracist's View of Marilyn Monroe's Death.’

“The conspiracy theories about Marilyn’s death as they exist now did not exist in the 60’s. They grew exponentially from the 60’s to where we are now,” McGovern says, quoted by Fox.

McGovern’s story comprises the backbone of the final episode of Fox Nations series “Scandalous: The Death of Marilyn Monroe” to be aired this Sunday. The episode will detail how three people conspired to pin the death of the Hollywood star on the Kennedys.

According to the documentary, the cabal of conspirators included Jack Clemmons, the policeman who first arrived at the scene; Maurice Reis, the president of The Motion Picture Alliance for the Preservation of American Ideals and Walter Winchell, a right-wing writer.

The three conspirators met for the first time months after Monroe’s death, the documentary says.

Reis, who was paranoid of a purported “Communist invasion into Hollywood,” kept tabs on many movie stars, including Monroe. At the meeting, he told the other two about Monroe’s alleged sexual relations with John F. Kennedy. The trio then forged the likely fabrication into a story of how Robert Kennedy ordered her assassination to cover up the affair.

The story needed something that could pass as evidence; enter Clemmons, who kept saying that he noticed discrepancies at the scene when he first entered Monroe’s bedroom. His testimony relied primarily on the notorious drinking glass which was supposedly missing and, therefore, Monroe could not have swallowed dozens of sedatives. On the photo published by the police, the drinking glass can be seen next to Monroe’s bed. Clemmons stated that the movie star’s housekeeper was destroying evidence in a washing machine.

According to the documentary, Clemmons had a good reason to spread stories discrediting the Los Angeles Police, as the Department had earlier ousted him.

For the conspiracy to go viral, the trio needed a platform which was provided by Winchell, who was a “very powerful New York gossip columnist.”

“Winchell serialized what essentially was a theory. That Bobby Kennedy and Marilyn had had an affair and that Bobby Kennedy had Marilyn murdered. I don’t know that Winchell ever comes out and says that. But it’s insinuated,” McGovern says in the documentary.

But one has to be careful with conspiracy theories, as they often backfire, which was exactly what happened. Ten years later, after the Clemmons-Reis-Winchell theory became popular, the iconic US novelist Norman Mailer published his instant bestseller “Marilyn: The Biography”.

In the final chapter of the book, Mailer turned the conspiracy theory on its head and alleged that the movie star was killed by the conspirators themselves, who then came up with their theory to cover up their own crime.

Monroe was found dead on the morning of 5 August 1962 in her bed. The autopsy indicated acute poisoning by two brands of strong sedatives. As a result of the conspiracy theories, the investigation into the star’s death was reopened 20 years later, but no evidence of Monroe’s death as a homicide was found.

000000
Popular comments
A FOX documentary about a sensitive topic, that absolves men of power, that must be the truth (extreme sarcasm).