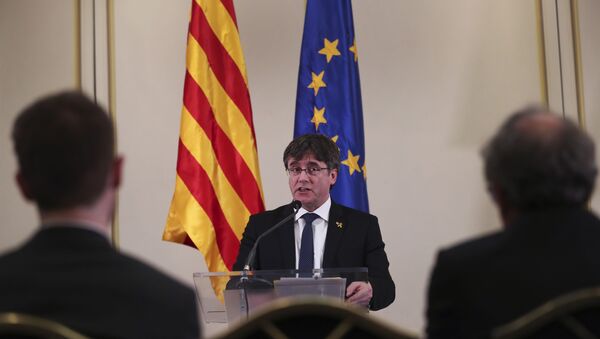 © AP Photo / Francisco Seco
Subscribe
Carles Puigdemont, who was thrust into the media spotlight two years ago amid a Catalonia independence referendum, insisted that those events were preceded by 30 years of Catalans exhausting all other options while attempting to engage in a realistic dialogue with Madrid.

In an exclusive interview on the sidelines of the Endorfine Cultural Festival in Lugano, Carles Puigdemont offered several insights regarding Europe, relations with Russia and Catalonia independence.

Sputnik: The EU court will deliver a verdict on your case soon. You’ve been elected an MEP but cannot participate in the European Parliament sessions. What do you expect from this court ruling?

Carles Puigdemont: Of course I hope that the court will rule in our favor, in favor of the Catalans and of the European democracy. Ever since millions of people elected me into the European Parliament, the Spanish authorities do their best to prevent me from representing my voters in Brussels. They insist that I must head to Madrid and swear allegiance to the Spanish Constitution. This demand violates European law, and we hope that the EU Court will rule in our favor soon, though we don’t know exactly when to expect the court ruling.

Sputnik: Suppose that the court takes your side, what values do you intend to promote in the European Parliament? How do you perceive Europe’s idea?

Carles Puigdemont: Our Europe is the Europe where the voice of the people is more important than anything else. Catalonia is a nation, one of the oldest in Europe. Our parliament, our institutions and our constitution stem from the Middle Ages, and we lost them in 1714 when the House of Bourbon established the Spanish monarchy in our country. Until then, Catalonia was a nation in every way. We are still a nation, and if the people demand it, we have the right to attain independence.

Sputnik: So you claim that Europe is founded on nations? Many populist movements seem to have the same idea.

Carles Puigdemont: Paradoxically, the so-called populism is one of the principles on which human rights are based. The Article 21 of the Universal Declaration of Human Rights states that “The will of the people shall be the basis of the authority of government”. As per this principle, I believe that Europe can become more unified if it is allowed to retain its differences. But what serves as the guarantee of keeping these differences? Obviously, it’s the different origins and traditions, different points of view, different languages, and not just the official languages of the member-states but also the more rare languages. Such [that] Europe would’ve been closer to our ideals of democracy and human rights. 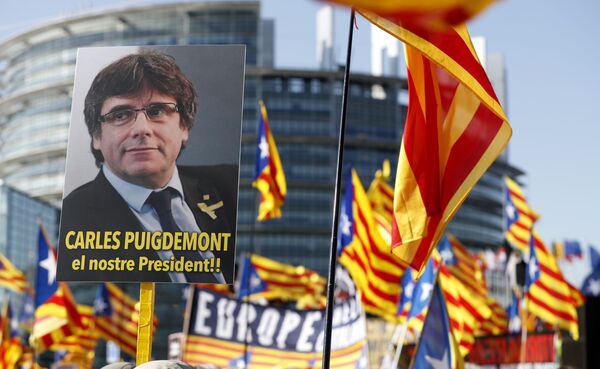 Sputnik: So can we call you a pro-European populist?

Carles Puigdemont: (laughs) No, I’m not a populist. But I do believe in nations because I believe in democracy. I stand against the nationalist perception of democracy, which states that the authority must dictate every aspect of our lives, and that that authority can only be elected once every four years. Today, each of us has smartphones and tablets which allow us to make decisions and implement them faster than before. This technology affects our families, our culture, the way we do business. Why can’t we accelerate the democratic processes in a similar fashion?

Sputnik: So you advocate a broader participation of citizens in the governance; like in Switzerland, for example?

Carles Puigdemont: Switzerland is a model example. Not everything is perfect there, of course, but democracy works in that country because the confederation is founded on respect of differences. If we were to perceive the EU as one big Switzerland, we would be able to better prepare for future problems. Switzerland shows the rest of the world how one can successfully run a country despite all the differences, and how one can guarantee dignity to all citizens: respect for personality, ethnicity, culture and languages.

Sputnik: What’s your attitude towards Russia, the anti-Russian sanctions and the crisis in Ukraine?

Carles Puigdemont: Russia and the EU need to improve relations. I think it is absurd that we have more problems with Russia than we had with the USSR. I’m certain that the future will be attained via dialogue and cooperation between East and West; therefore improving relations is in the interests of Russia and the EU. Several years have passed since the implementation of the sanctions, and we’ve have seen what results they’ve yielded. It’s time to change it. It could become the first step for Europe to become the protagonist in resolving the Ukrainian crisis.

Sputnik: The future of the EU seems murky, especially considering Brexit. Can you imagine Catalonia being part of a fractured Europe?

Sputnik: Spain does not intend to recognize Catalonia’s independence. Have you considered alternatives to protect Catalan independence?

Carles Puigdemont: For us, independence became the final alternative after 30 years that we spent trying all other possible solutions, engaging in dialogue with Spain, cooperating with all of Spain’s governments – both left-wing and right-wing. We tried improving the Spanish democracy, we renewed our autonomous status, we gained public support. We tried all the options, but in response we only heard “no”. Facing such attitude, the people can either come to terms with it or mobilize against the injustice. In this case, the Catalans mobilized via democratic means, and they wish to be heard.

Sputnik: Would you be willing to cooperate with Madrid if it were ready to negotiate?

Carles Puigdemont: We did it in the past, and we paid dearly for it. And it was all for naught. If the Spanish government were to present some kind of project aimed at resolving the Catalan issue, we would’ve been willing to appraise the offer. But as of today, no such projects that we would’ve been willing to discuss were offered by Madrid. Instead, they prefer to cite Article 155 of the Spanish Constitution and to avoid engaging in dialogue.

Sputnik: Nearly two years have passed since the day of the independence referendum. What are your future prospects?

Carles Puigdemont: The way is hard, and there’s much uncertainty, but some things I am certain about. First, that we always promote dialogue, but if there’s no such opportunity, then we’ll use all available options that we have the right to use in our struggle. Second, that we won’t abandon our cause and our aspirations, no matter what “fake news” certain Spanish media were to disseminate. During the last election, proponents for the nation's independence broke their historic record; we’ve never been this strong.

Sputnik: But the media, even Catalan media, report of growing discontent with independent parties like yours.

Carles Puigdemont: It’s true, more people today are disaffected with independent parties than before, so we must analyze our actions and learn from our mistakes. I'm fighting for maximum unity on the independence front, as it's the best way to have strength.

Sputnik: You were talking about identity, the term which is frequently used in the context of right-wing movements. Catalans are being supported by parties like “Flemish Interest” in Belgium or “Lega Nord” in Italy, and yet you call yourself progressive.

Carles Puigdemont: I never asked other countries or political parties for support. I only asked to give me a chance to explain my cause and to allow me to be heard. Recently, Global Spain released a report containing fake news. This news described the Catalan independence movement as right-wing, and claimed that we want to prohibit teaching Spanish language in schools in Catalonia. One would only need to travel to Catalonia to realize that it’s all a lie.

Here are the facts: we are supported by various political parties and individuals who belonged to different movements, but we were never supported by ultra-right parties. In Germany, I was warmly welcomed by Die Linke party which is obviously left-wing; from France came a declaration of support for political prisoners that was signed by representatives of all of the parliament’s parties; there’s a group of Catalonia’s friends in Westminster which counts both Conservatives and Labour among its members, along with the Scottish National Party. Catalonia is supported by representatives of left-wing and right-wing groups alike, the pro-Europeanists.

000000
Popular comments
Pigdemon is a political corpse and a petty criminal of the Catalan bourgeoisie elite. Majority identifies as Spanish and proudly so. This experiment is over. Live with it.

(real)mikhas....
15 September 2019, 12:19 GMT1
000000
- Calling him “pigdemon” is neither funny nor offensive, but it defines you. - Would he a political corpse or a petty criminal, he wouldn't be interviewed by international media such as Sputnik. - Everyone knows that his family runs a modest bakery in a little town near Girona. - The catalan bourgeoisie votes unionist and founded the Ciudadanos party. - Both unionists or republicans, 80% of Catalans are ready to hold a referendum and abide by any result. - This “experiment” has been going on for 300 years and it can only end one way. Live with it.
Roger Weigel Bosch
15 September 2019, 20:46 GMT
000000
Newsfeed
0
New firstOld first
loader
LIVE
Заголовок открываемого материала
Access to the chat has been blocked for violating the rules . You will be able to participate again through:∞. If you do not agree with the blocking, please use the feedback form
The discussion is closed. You can participate in the discussion within 24 hours after the publication of the article.
To participate in the discussion
log in or register
loader
Chats
Заголовок открываемого материала
Worldwide
InternationalEnglishEnglishMundoEspañolSpanish
Europe
DeutschlandDeutschGermanFranceFrançaisFrenchΕλλάδαΕλληνικάGreekItaliaItalianoItalianČeská republikaČeštinaCzechPolskaPolskiPolishСрбиjаСрпскиSerbianLatvijaLatviešuLatvianLietuvaLietuviųLithuanianMoldovaMoldoveneascăMoldavianБеларусьБеларускiBelarusian
Transcaucasia
ԱրմենիաՀայերենArmenianАҧсныАҧсышәалаAbkhazХуссар ИрыстонИронауОssetianსაქართველოქართულიGeorgianAzərbaycanАzərbaycancaAzerbaijani
Middle East
Sputnik عربيArabicArabicTürkiyeTürkçeTurkishSputnik ایرانPersianPersianSputnik افغانستانDariDari
Central Asia
ҚазақстанҚазақ тіліKazakhКыргызстанКыргызчаKyrgyzOʻzbekistonЎзбекчаUzbekТоҷикистонТоҷикӣTajik
East & Southeast Asia
Việt NamTiếng ViệtVietnamese日本日本語Japanese中国中文Chinese
South America
BrasilPortuguêsPortuguese
NewsfeedBreaking
17:28 GMTParents of Suspected Michigan School Shooter Each Charged With 4 Counts of Involuntary Manslaughter
16:57 GMTBiden Says Getting Cold Reason For His Hoarse Voice, Tests for COVID-19 Every Day
16:48 GMTHunter Biden Joked With Therapist Friend About Joe Biden’s 'Triumph Over Dementia,' New Book Claims
16:30 GMTUS Reportedly Plans Javelin Missile Delivery to Ukraine, Reneges on Surface-to-Air Missiles
16:26 GMTModi Gov't Reveals Why India Bought Russia’s S-400 'Triumf' Despite Threat of US Sanctions
16:14 GMT'Fake News and False Intelligence': China Hits Back at UK Spy Agency Chief Over 'Debt Traps' Remarks
16:10 GMTOSCE Ministerial Council: Pro-Western Figures in Spotlight, Growing Pressure on Russia, Belarus
16:00 GMTSpanish Lower House Recognises Animals as Sentient Beings
15:59 GMTIsrael’s NSO Reportedly in Covert Deal With Cyber Firm Trained to Exploit Security Weak Spots
15:54 GMTContacts Between Biden, Putin Can Calm ‘Overheated’ Relations, Russian Envoy Says
15:32 GMTScared of Misinformation? Beware of... Cute Cats, NYT Warns
15:00 GMTIndian Cricketer Virat Kohli's Dismissal in Second Test Match Against New Zealand Sparks Controversy
14:53 GMTIndia Deployed Warships at Forward Positions in IOR During Border Clashes With China: Navy Chief
14:52 GMT'Alternative' Mueller Report Could Be Released Soon
14:49 GMTRevealed: CIA Staffers Involved in Child Sex Abuse Crimes Dodged Prosecution Despite Evidence
14:01 GMTBritish Couple Who Killed Six-Year-Old Arthur Labinjo-Hughes Jailed
13:59 GMTWarsaw Expects New Afghan Migrant Flow at Border Organized by Minsk in Next Months
13:56 GMTLocked and Loaded: Man Ends Up With WWII Artillery Shell Stuck in His Rectum
13:41 GMTRussia's Arctic National Park Reports Disappearance of Peninsula on Franz Josef Land
13:33 GMTPakistan Says Its Serbian Embassy Accounts Hacked After Posts Criticising PM Khan Appear Online