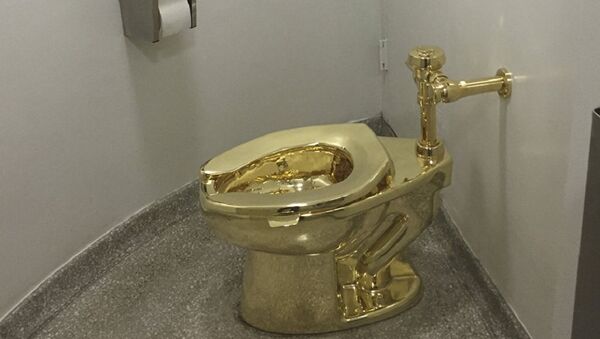 The exorbitant bathroom piece was made entirely of 18-carat gold by Italian prankster and conceptual artist Maurizio Cattelan in 2016. The idea behind the piece, titled 'America' is a reminder of the absurdity of modern wealth disparity

Blenheim Palace, the birthplace of Winston Churchill in Woodstock, Oxfordshire was closed on Saturday for the whole day after a solid gold toilet was stolen from the building.

Thames Valley Police confirmed the theft on afternoon and are now conducting a probe into the the incident. A 66-year-old man was arrested and remains in police custody in relation to the theft.

Detective Inspector Jess Milne said in the police statement that "the piece of art that has been stolen is a high value toilet made out of gold that was on display at the palace.

Thames Valley Police said they believe that "at least two vehicles" were used and "a group of offenders" were responsible for the break in during the early hours of the morning.

They also confirmed that "the artwork has not been recovered at this time" but they were "conducting a thorough investigation to find it and bring those responsible to justice".

The breach "has caused significant damage and flooding" due to the toilet being plumbed into the mechanism of the building.

Police say that they first received reports of the break in at 4.57am, 7 minutes after the thieves escaped in two vans. Blenheim Palace are co-operating with a police investigation. No injuries have been reported so far and investigators are calling for information from any witnesses.

The Palace's apologised for "any inconvenience" on twitter on Saturday morning due to the closure of the site building, initially until lunch time and later announced the closure will continue for the rest of the day.​

​The toilet itself is an art piece called America, designed by Italian conceptual and 'prank' artist Maurizio Cattelan and is 18ct gold and reportedly worth up to $1 million.

It was first installed Blenheim Palace in August, serving as Mr Cattelan's first solo exhibition in 20 years, where visitors were free to the toilet provided they use it within a tight three minute timeframe.

Edward Spencer-Churchill, the founder of the Blenheim Art Foundation, previously told the Times regarding security concerns thart "it's not going to be the easiest thing to nick"

"Firstly, it's plumbed in and secondly, a potential thief will have no idea who last used the toilet or what they ate".

The toiler was previously displayed in 2016 at New York's Guggenheim museum. Visitors who wanted to use the toilet were surrounded by security to protect the piece.

The museum offered the toilet to US President Trump, known for his love of golden decorations, seeing his mansions trimmed with gold and golden curtains installed in the White House.

Blenheim Palace is a World Heritage Site constructed from the 18th century, currently the primary residence of the Dukes of Marlborough.