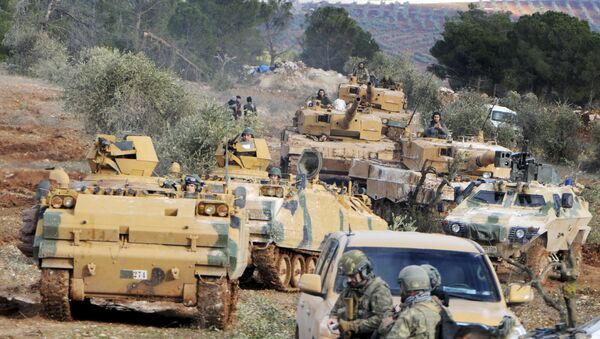 MOSCOW (Sputnik) – The US Department of Defence is going to send around 150 troops to northeastern Syria to carry out joint patrols with Turkey, US media has reported.

The move will be part of a series of military and diplomatic steps, taken by the United States over recent weeks to ease tensions in relations with Turkey due to Washington’s ongoing support for Kurdish units, operating in northern Syria, The New York Times reported on Thursday.

US military and diplomatic officials have refused to comment on the issue.

The United States currently has less than 1,000 troops in Syria, who are involved in fighting the remnants of the Daesh* terror group .

In August, the United States and Turkey reached an agreement to create a safe zone in northern Syria. The Syrian government has opposed the US-Turkish agreement, labelling it a violation of both Syria's sovereignty and territorial integrity as well as a breach of international law.

On Tuesday, Turkish presidential spokesman Ibrahim Kalin said that Ankara would act unilaterally in northern Syria if the US fails to implement the reached agreement.

Syria has been marred by an armed conflict since 2011. In May 2017, the warring parties held talks in the Kazakh capital of Nur Sultan under the mediation of Russia, Iran and Turkey, and managed to conclude a ceasefire agreement and establish four de-escalation zones. Even though in some parts of Syria military operations continue, the priority is now on a political settlement and the return of refugees.