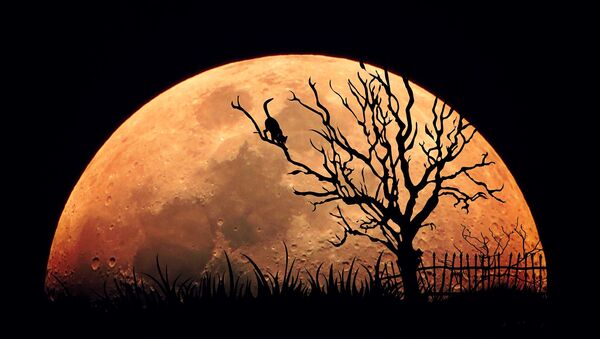 © Photo : Pixabay
Subscribe
New Delhi (Sputnik): Ringing the bells of mythological and astrological superstitions, for the first time after a 13-year-gap Friday the 13th is coinciding with a full moon today.

With over 40,000 mentions, #FridayThe13th has also started trending on Twitter in India.

The last time such an occurrence took place was in January 2006. The next time will be in May 2033, local media reported on Friday.

According to folklore, tonight’s moon is also known as the “harvest moon” or “corn moon”, as it tends to provide relatively bright moonlight early in the evening, which has been a traditional aide to farmers in the past when harvesting their summer crops.

so we can expect werewolves today

We are on the 14th floor. There is no 13th floor. That means we are both in room 1408 and also on the 13th floor.
Happy Friday the 13th, from Qatar! #FridayThe13th pic.twitter.com/rnE2sk3tBF

Some say that we make our own luck #FridayThe13th
make it lucky! pic.twitter.com/3EBr8IHsuz

8. The middle seat on a plane
9. An egg yolk splitting
10. Messaging the wrong group chat
11. Going for a hug when they go for a handshake
12. Opening a bag of rice too aggressively so rice goes EVERYWHERE
13. Topping your petrol up to a round number but it goes 1p over

Friendly reminder that black cats are NOT bad luck! If this Friday the 13th you see a black cat, be kind! So many people abuse or hurt black cats because of a silly old story that is not true! In many cultures black cats are considered lucky! #FridayThe13th #BlackCat pic.twitter.com/xhyouVOS5a

Astronomical beliefs suggest that the moon today will be at its farthest distance from Earth, appearing really small. The scientific name for today’s moon is a “micro moon”.

Stemming from the early era of Christianity, the reason why Friday the 13th is feared and considered “inauspicious” is because it is believed that after having being betrayed by Judas - the 13th guest who joined the Biblical event of the “Last Supper”, Jesus Christ was crucified on a Friday.

The fear of the number 13 is called “triskaidekaphobia”, which causes people to refrain from travelling, purchasing things, and even marrying on the 13th day of any month, especially falling on a Friday. Several apartments, hotels, and even flights skip the number because customers avoid choosing it.

For a month to have a Friday the 13th, it must begin on a Sunday.