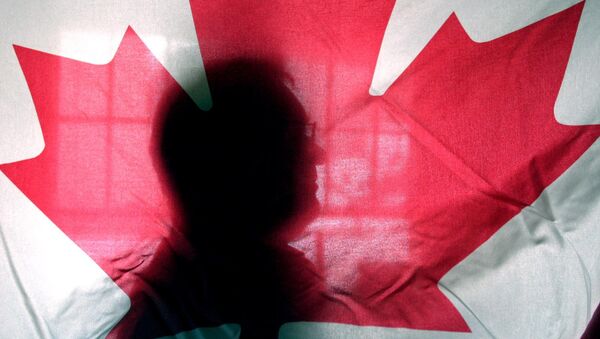 © AP Photo / Alden Pellett
Subscribe
A senior member of the Royal Canadian Mounted Police has been arrested and charged under a little-known statute called the Security of Information Act. He’s accused of intentionally communicating “special operational information,” obtaining information and possessing a device or software used to conceal or “surreptitiously” communicate information.

National security expert Cameron Ortis, 47, appeared in an Ottawa courtroom Friday afternoon to face three charges brought against him that suggest he mishandled top secret information. His case was put over to September 20 and he remains in custody.

Under the Security of Information Act, a 1985 law that protects Canadian state secrets, Ortis is charged with “unauthorized communication of special operational information” and “preparing for the commission of an offense by obtaining or gaining access to information, or possessing any device, apparatus or software used for concealing, surreptitiously communicating or obtaining information,” according to the Canadian Broadcasting Corporation.

However, he also faces charges under the criminal code, including breach of trust by a public officer and unauthorized use of a computer, which the CBC notes can include obtaining computer service through a device and intercepting some of its functions.

"The charges stem from activities alleged to have occurred during his tenure as an RCMP employee," the RCMP said in a statement. "As this investigation is ongoing, we will not be making any other comment at this time."

While the RCMP would not confirm Ortis’ position in the law enforcement service, Global News reported he was director general of an intelligence unit at RCMP headquarters in Ottawa. CBC reported Ortis is an expert in East Asian affairs, critical infrastructure and the use of “bots.”

“[Ortis] is a civilian cyber security guy in the RCMP, and the combination of charges implies he’s accused of either hacking or just plain out stealing sensitive info through digital networks presumably and passing it along,” CTV News legal analyst Ed Prutschi said in a Friday article.

"I was, of course, made aware of the arrest," Canadian Prime Minister Justin Trudeau told reporters. "I can assure you the authorities are taking this extremely seriously."

Canada is part of the “Five Eyes” anglophone intelligence alliance, along with the US, UK, Australia and New Zealand, which share intelligence with each other.