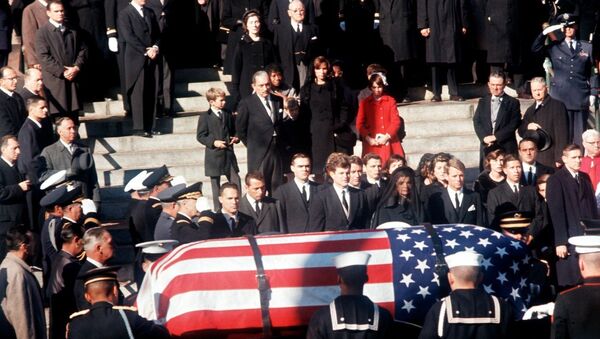 After giving a televised victory address to journalists and campaign workers at his campaign headquarters in Los Angeles’ Ambassador Hotel, Kennedy left the podium and headed to a gathering of supporters elsewhere in the building – while walking through the hotel pantry, he was blasted three times with a handgun, once in the head and twice in the back.

The apparent shooter, 24-year-old Palestinian refugee Sirhan Sirhan, was subdued by a group of individuals led by Kennedy’s bodyguard William Barry – Sirhan would continue firing in random directions while restrained, wounding five more people in the process. Witnesses would later describe him as being in a ‘trance-like’ state throughout the incident.

Kennedy died in hospital 26 hours later, and Sirhan was convicted of murder in April 1969, sentenced to death by gas chamber – commuted to life imprisonment three years later, after the California Supreme Court outlawed the death penalty. Despite repeatedly applying for parole in the decades since, he remains incarcerated at the Richard J. Donovan Correctional Facility in San Diego, California.

On the surface, the parole board’s intransigence is perhaps understandable - few murders in history seem as eminently open and shut as Robert F Kennedy’s. Beyond the literal smoking gun clasped tightly in Sirhan’s hand that night, his pockets were laden with incriminating evidence, including .22 caliber bullets of the kind with which Kennedy was shot, and two newspaper clippings – one an article about the presidential hopeful’s pledge to provide military aid to Israel if elected, the other an advertisement for Kennedy’s appearance at the Ambassador Hotel.

Police searches of Sirhan’s apartment also yielded a number of journals in which he outlined his burgeoning fixation on killing Kennedy – the apparent impetus being Kennedy promising to send 50 fighter jets to Tel Aviv.

However, the case isn’t quite so clear-cut. For one, the location of Kennedy's wounds suggested his assassin fired from directly behind him, and Los Angeles’ Chief Coroner Thomas Noguchi, who performed Kennedy’s autopsy, concluded the fatal shot was fired behind Kennedy's right ear at a distance of approximately one inch - but dozens of witnesses place Sirhan a yard to the west of Kennedy during the shooting.

Insinuations of a second shooter don’t end there. Sirhan's .22-caliber revolver held eight rounds, all of which were fired. Three bullets hit Kennedy, two lodging in his body and the other tearing through his arm, and the five bullets which struck bystanders also lodged in their bodies – while this would by definition mean but one bullet could’ve been embedded in the pantry’s surfaces, three bullet holes were identified in the ceiling, and another two in the doorframe. The Los Angeles Police Department concluded the former were the result of ricochets, while never acknowledging the latter – officials would later remove the ceiling tiles and doorframe in question, and incinerate them.

Moreover, in August 1975, a Los Angeles judge convened a panel of seven experts in forensics to examine ballistic evidence relating to the case – the group found the three bullets that hit Kennedy were all fired from the same gun, but couldn’t match the bullets with Sirhan's revolver. An internal police document subsequently released under freedom of information laws noted the bullets which hit Kennedy and ABC News reporter William Weisel were "not fired from same gun" and "Kennedy bullet not fired from Sirhan's revolver”.

Validating the notion a second shooter was present that night yet further, in February 2008 audio forensic expert Philip van Praag conducted an extensive analysis of a recording of the incident and concluded 13 shots were fired, finding at least two instances in which the duration between shots was shorter than humanly possible using a single firearm.

Thane Eugene Cesar, who’d been employed by private security firm Ace Guard Service to protect Kennedy at the Ambassador Hotel that evening, has repeatedly been named as the most likely second shooter. By day, he worked as a maintenance plumber at the Lockheed Aircraft plant in Burbank, California, a job requiring Department of Defence security clearance. He’d leave the firm in 1971 for Hughes Aircraft Company, a major aerospace and defence contractor founded by reclusive, eccentric billionaire Howard Hughes, the role positioning him at the firm’s second-highest security clearance level.

When questioned by police, Cesar alleged he had drawn a gun at the scene of the shooting, but the weapon was .38 caliber, and he’d been knocked to the floor after the first shot and was unable to fire.

While he admitted to having once possessed a .22 caliber pistol, he alleged he’d sold the pistol prior to the assassination – researcher William W. Turner tracked down the purchaser in October 1972, who provided him with the receipt for the firearm. It bore Cesar’s signature and was dated 6th September 1968, three months after the assassination.

Cesar also made a number of comments to interviewing officers indicating he harboured extremely racist views and significant antipathy towards Kennedy, a champion of the civil rights movement.

“I definitely wouldn’t have voted for Bobby Kennedy. He had the same ideas as John did and John sold our country down the road. He gave [the country] to the Commies, to the minorities…He said ‘here, you take over, you run the white man’. Blacks have been cramming this integrated idea down our throats for eight years, you learn to hate them…One of these days, at the rate they’re going, there’s going to be civil war in this country. The blacks will never win,” he said.

Noting Cesar had landed the Ambassador Hotel security job “about one week earlier”, Kennedy Jr. alleges Cesar “waited in the pantry” as his father spoke in the ballroom, then “grabbed” him father by the elbow and “guided him toward Sirhan” – an accompanying photo is emblazoned with text claiming “multiple public records data aggregation services list Cesar's earlier employers as General Motors, the Mormon Church, and the Central Intelligence Agency”.

Thane Eugene Cesar died today in the Philippines. Compelling evidence suggests that Cesar murdered my father. On June 5, 1968, Cesar, an employee in a classified section of Lockheed’s Burbank facility, was moonlighting as a security guard at the Ambassador Hotel. He had landed the job about one week earlier. Cesar waited in the pantry as my father spoke in the ballroom, then grabbed my father by the elbow and guided him toward Sirhan. With 77 people in the pantry, every eyewitness said Sirhan was always in front on my father at a 3-6 feet distance. Sirhan fired two shots toward my father before he was tackled. From under the dog pile, Sirhan emptied his 8 chamber revolver firing 6 more shots in the opposite direction 5 of them striking bystander and one going wild . By his own account, Cesar was directly behind my dad holding his right elbow with his own gun drawn when my dad fell backwards on top of him. Cesar repeatedly changed his story about exactly when he drew his weapon. According to the Coroner, Dr. Thomas Noguchi, all 4 shots that struck my father were “contact” shots fired from behind my dad with the barrel touching or nearly touching his body. Cesar sold his .22 to a co-worker weeks after the assassination warning him that it had been used in a crime. Cesar lied to police claiming that he'd disposed of the gun months before the assassination. Cesar was a bigot who hated the Kennedys for their advocacy of Civil Rights for blacks. I had plans to meet Thane Eugene Cesar in the Philippines last June until he demanded a payment of $25,000 through his agent Dan Moldea. Ironically, Moldea penned a meticulous and compelling indictment of Cesar in a 1995 book and then suddenly exculpated him by fiat in a bizarre and nonsensical final chapter. Police have never seriously investigated Cesar's role in my father’s killing.

“By his own account, Cesar was directly behind my dad holding his right elbow with his own gun drawn when my dad fell backwards on top of him. Cesar repeatedly changed his story about exactly when he drew his weapon…I had plans to meet Cesar in the Philippines last June until he demanded a payment of US$25,000 through his agent Dan Moldea. Ironically, Moldea penned a meticulous and compelling indictment of Cesar in a 1995 book then suddenly exculpated him by fiat in a bizarre and nonsensical final chapter. Police have never seriously investigated Cesar's role in my father’s killing,” he fulminated.

It’s not the first time RFK Jr. has suggested Cesar was responsible for his father’s killing, and he’s not the only member of the Kennedy clan who believes Cesar is responsible for his father's death – he’s previously claimed the LAPD unit that investigated her father’s assassination was run by active CIA operatives, and “destroyed thousands of pieces of evidence”. Moreover, he claimed Sirhan's state-appointed legal representative Grant Cooper was the personal lawyer of mobster Johnny Rosselli, who “ran the assassination program for the CIA against Castro” – Cooper “pressured Sirhan to plead guilty so there was no trial”, he claimed.

Whatever secrets Cesar may have had he evidently took to the grave – and Sirhan can shed no light on the ever-mystifying case either, as beyond his ongoing imprisonment, he’s had no memory of the shooting ever since that fateful evening. Most of the self-incriminatory statements cited by the prosecution were made while he was under hypnosis - although transcripts of the interviews show Sirhan himself had trouble believing he’d pulled the trigger at points.

“My own conscience doesn’t agree with what I did…It’s against my upbringing, my very nature. My childhood, the family, the church, prayers, bibles, and all that, thou shall not kill, and what I’ve tried to conform to as far as the ethics of life or the moralities of life. And here I go and splatter this guy’s brains. It’s just not me. It’s just not me,” he said at one point.

Defence psychiatrists Eric Marcus and Bernard Diamond examined Sirhan, and concluded he suffered from paranoid schizophrenia, and was in a dissociative state at the time of the shooting - a disruption in the normal processes of memory and consciousness – meaning he couldn’t be held criminally responsible for his alleged actions.

Psychologist and hypnosis expert Dr. Eduard Simson-Kallas went even further – after spending 35 hours interviewing Sirhan at San Quentin Prison in 1969, he concludedx Sirhan had been psychologically programmed by persons unknown to commit the murder, that he wasn’t aware or in control of his actions at the time, and his mind was "wiped" in the aftermath by so he’d have no memory of the event or of the people who programmed him.

Critics of Simson-Kallas’ admittedly eyebrow raising theory have suggested he was inspired by The Manchurian Candidate, a then-popular thriller novel in which a US soldier taken prisoner during the Korean War is brainwashed by his captors into becoming a ‘sleeper agent’, and after release reintegrates into US society unaware he’s been primed to carry out an assassination and facilitate the Communist-takeover of the US.

In an extremely curious coincidence, the director of the book’s film adaptation John Frankenheimer became a close friend of Robert F. Kennedy during its creation in 1962, and produced a number of commercials for use in Kennedy’s 1968 presidential campaign. Even more amazingly, it was none other than Frankenheimer who drove Kennedy from Los Angeles Airport to the Ambassador Hotel for his acceptance speech.