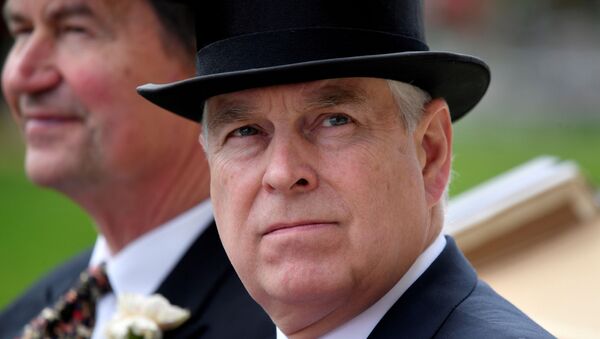 Queen Elizabeth’s son has been in international headlines since August over his ties to now-deceased convicted sex offender Jeffrey Epstein, as one of the disgraced financier’s accusers, Virginia Roberts (now known as Virginia Giuffre), claims that the American billionaire forced her to have sex with the royal when she was only 17.

Embattled Prince Andrew stood “eyeball to eyeball” with Master of the Royal Household Tony Johnstone-Burt, who oversees Buckingham Palace’s refurbishment and staff and is rumoured to be the Queen’s favourite butler, several British tabloids report. According to The Daily Star, “something snapped” on the day of the incident, as the Duke of York was suffering from “immense strain”.

The row allegedly evolved from a standard request by the British royal, who asked the butler to book a room at the Palace for a project, but was rejected. He is said to have responded amicably at first but became “very cross” when Johnstone-Burt started “speaking his mind” about the plan, as the report describes.

“He just lost it. There was some talk a few months ago that Andrew was unhappy about moving out of his apartment during renovation work, but people are just speculating. They squared up to each other eyeball to eyeball”, an unidentified insider told another British outlet, The Sun.

According to another source cited by The Daily Star, heated words were heard from both sides, but it was in no way physical. However, reports on how the issue was resolved vary. According to one version, Andrew apologised after his older brother Prince Charles told him to. Another insider suggests that “there was no apology because there was nothing to apologise for” and points out that Andrew maintains “a good relationship with the Prince of Wales”.

At the same time, The Daily Mail cites a third insider, describing the situation as “poking a bear” and saying that Andrew had “turned on him” in an argument described as more “handbags than hand grenades”.

The clash is said to have been the “talk of the palace” for several weeks, and a Buckingham Palace spokesman confirmed that there was a disagreement between the royal and a staffer.

“Some time ago there was a disagreement between The Duke of York and a member of staff. The disagreement was resolved and there are no ongoing issues”, he stated, as cited by The Daily Star.

Prince Andrew has kept a low profile since allegations about his friendship with Jeffrey Epstein, who killed himself a month ago in prison, and purportedly having had sex with one of the financier’s suspected victims came to light this August. He made his first appearance since Epstein’s death only recently at an occasion marking the 75th anniversary of the liberation of Bruges.

Prince Andrew was one of the prominent figures who had allegations brought against them in relation to the Epstein case this summer. One of Epstein’s accusers, Virginia Giuffre, claimed that she was ordered to have sex with the duke against her will.

While Prince Andrew has adamantly denied "any form of sexual contact or relationship" with the girl, since Epstein’s death a series of reports regarding the relationship with the two prominent men have been made. The reports include the pair travelling together on Epstein’s private jet with a teenage Ms Roberts. The Royal Family has denied the reports regarding the plane, citing "inconsistencies" in the story.

Andrew released a direct statement in response to the allegations on Saturday, claiming that he did not "see, witness or suspect any behaviour of that sort that subsequently led to [the] arrest and conviction" of Epstein.