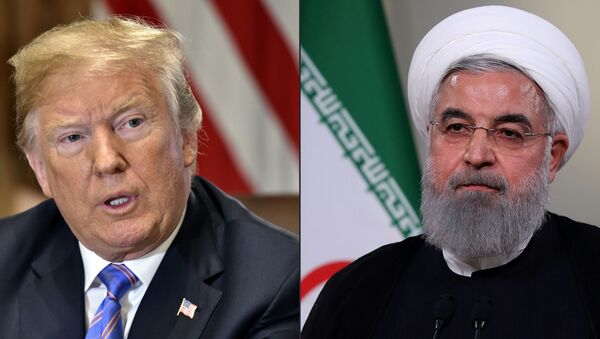 UNITED NATIONS, (Sputnik) – The 74th session of the UN General Assembly General Debate will kick off on 24 September. During the high-level week, world leaders will have a chance to discuss global issues. According to the provisional list of speakers, Trump will deliver his statement on September 24, while Rouhani will take the floor the next day.

US President Donald Trump and Iranian leader Hassan Rouhani are not expected to hold a meeting during the upcoming 74th session of the UN General Assembly in New York, according to the head of the media office of the Iranian Mission to the UN, Alireza Miryousefi.

"There is no meeting envisaged between the two presidents during UNGA week", Miryousefi said.

On 4 September, Trump said that he does not rule out the possibility of meeting with Rouhani during the UN gatherings. The next day, media reported that Washington had proposed organising such a meeting.

On Tuesday, US Secretary of State Mike Pompeo said Trump and Rouhani could potentially meet during the General Debate week at the United Nations. Two days later, Treasury Secretary Steven Mnuchin said that the two sides had not made any plans yet to meet on the sidelines of the event.

In late August, the White House said that Trump wanted to talk to Iran's leaders about a new nuclear deal without any preconditions such as relief from the maximum pressure campaign the United States had imposed on the country.

The two countries have been at odds for the past several months. In May, Trump withdrew from the Joint Comprehensive Plan of Action (JCPOA) on Iran's nuclear program and reimposed sanctions against Tehran.

Apart from the nuclear deal, Tehran and Washington clashed over the situation in the Persian Gulf, where several tankers got attacked allegedly by Iran. In July, the Iranian authorities seized a UK-flagged tanker in the Strait of Hormuz prompting sharp criticism from the White House. Trump even called on allies to establish a maritime coalition to protect vessels passing through Hormuz.