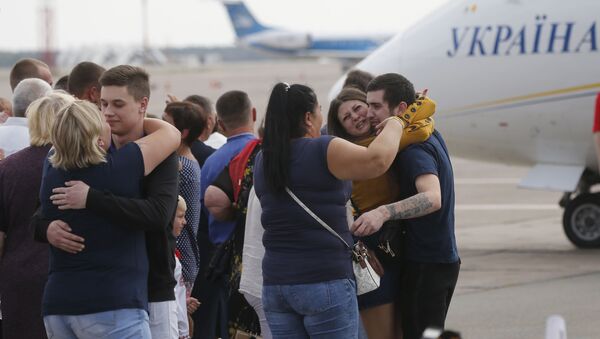 KIEV (Sputnik) - New lists are being prepared for the next stage of the release of detainees, following a simultaneous release last week agreed by Kiev and Moscow, Ukrainian President Volodymyr Zelensky said Friday.

Kremlin Spokesman Dmitry Peskov addressed the Russian-Ukranian detainee release, stressing that to begin a new stage both sides require hard work and a lot of time.

His statement comes after Ukrainian President Volodymyr Zelensky claimed that the next stage would be discussed at a meeting of the contact group in Minsk and at a summit of the Normandy Four, which includes France, Germany, Russia and Ukraine.

"I will be honest, we are now preparing other lists and are waiting for the next stage", he said at YES forum broadcast by 112. Ukraine broadcaster.

On 7 September, Russia and Ukraine each released 35 convicted and detained persons, including Ukrainian filmmaker Oleg Sentsov, who was sentenced to 20 years in Russia for plotting acts of terrorism in Crimea, and 24 Ukrainian sailors who were accused of violating the Russian maritime border.

RIA Novosti Ukraine portal head Kirill Vyshinsky also arrived in Russia after being held in Ukrainian custody for over one year.

Numerous officials and public figures in Moscow and Kiev, as well as leaders of many western countries, welcomed this move and expressed hope that this could launch a process of normalisation of the Russia-Ukraine relations.

Moscow returned the sailors, who were detained in November while attempting to illegally cross the Russian border in the Kerch Strait, to Ukraine earlier in the month under the carefully-negotiated bilateral deal on simultaneous release of detainees and convicted persons. The vessels, however, remain Russia's custody.

"No, the issue has not been addressed", Peskov told reporters, adding that he was not ready to say on what conditions Russia could release the vessels. "Apparently, this issue is to be discussed during one of those contacts that Moscow and Kiev have. It will be discussed when it is raised". 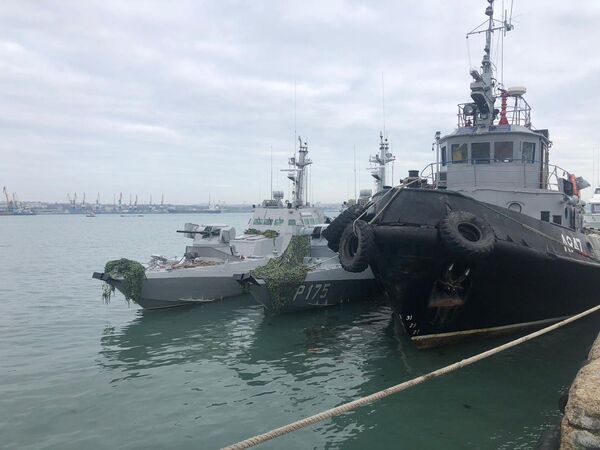 On 25 November 2018, two small armoured gunboats of the Ukrainian Navy, Berdyansk and Nikopol, along with the Yany Kapu tug-boat crossed the Russian maritime border in the Black Sea, disregarding warnings from the coast guard. The authorities arrested the ships and 22 sailors and two members of the Ukrainian Security Service who were on board the vessels.

Peskov also noted that Moscow deeply disapproves of Zelensky's statement in support of sanctions against Russia over Crimea, which the Ukrainian president called "a tax imposed for the sake of peace".

At the same time, the Kremlin positively assesses Kiev's statement on the preparation of a road map for the implementation of Minsk agreements.

"I should probably add that we like a lot more the statement we heard from Kiev on the preparation of a detailed road map on Ukraine's implementation of its commitments under the Minsk agreements", the spokesman said.

During an international forum in Kiev, Zelensky claimed that sanctions against Russia should be in place until the war in Ukraine ends.

The EU and the US introduced sanctions in 2014, accusing Moscow of interfering in the internal crisis in Ukraine. This occurred after violent rallies in the Ukrainian capital led to a coup d'état that forced then-President Yanukovych to leave the country.

Following the takeover, Crimea reunited with Russia, while Donetsk and Lugansk declared their independence and refused to obey the government in Kiev. 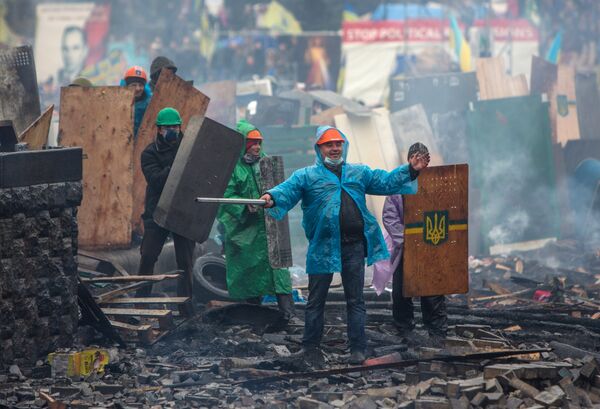 Opposition supporters are seen on Maidan Nezalezhnosti square in Kiev, where clashes began between protesters and the police. (File)
© Sputnik / Andrey Stenin

Russia, for its part, has stressed that Crimea reunited with the country in accordance with international law via a peaceful democratic referendum. Moscow has also denied having any involvement in the civil war that erupted in Ukraine, yet Brussels and Washington have prolonged anti-Russian sanctions several times since then.