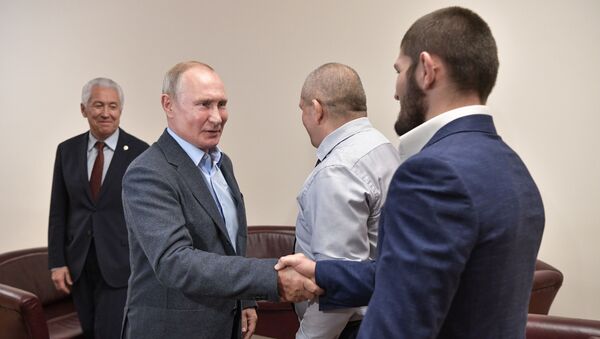 Before leaving the region, the Russian president congratulated Dagestan-born Khabib and his father, Abdulmanap Nurmagomedov on a “convincing victory” on Saturday.

“I want to congratulate you upon the victory of your son, a worthy victory", Putin said to Khabib’s father.

“Convincing victory", he then said to Khabib, “I watched the fight, well done. Very good rear-naked choke, classic choke hold, right? And you did not squeeze his throat, but were holding him on both sides of the neck, as it should be. It was all fair", said Putin referring to Khabib’s third-round motion that brought him victory over Poirier.

Putin is a well-known supporter of the martial arts, he himself is a master of sports in sambo, and a regular spectator at fights.

Khabib Nurmagomedov is currently one of the most popular and recognised athletes in Russia. He still lives and trains in his home city of Makhachkala in Russia’s Republic of Dagestan while not competing in fights in the US.

He later shared a video of the meeting with the Russian president on his Instagram account, saying that it was “worth a lot”.

“Today, Father and I were received by the President of Russia Vladimir Vladimirovich Putin", wrote Khabib on his Instagram account. “The meeting was held in my native Dagestan. It is very pleasant when the Head of State appreciates our work with Father and supports us, and after each victory, as usual, he personally congratulates us, it is worth a lot".

Putin and Nurmagomedov also indirectly touched upon Khabib’s brawl with Irish fighter Conor McGregor in October last year, for which the Russian fighter was suspended for 9 months. The remarks came as Nurmagomedov noted that this time “the opponent was strong and respectable”.