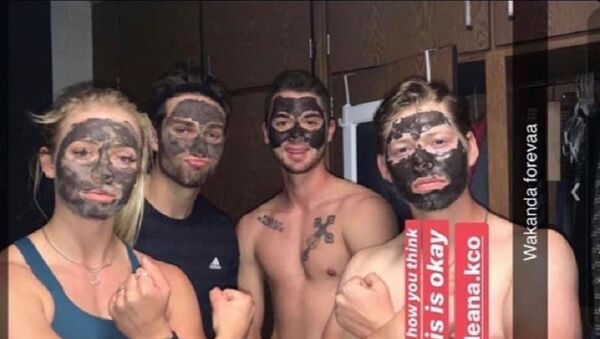 Blackface has become a controversial issue in the academic environment this year, often being discussed in relation with the activities of the Ku Klux Klan.

The administration of Colorado State University (CSU) has said that it will not punish students who posted a picture of themselves on social media wearing blackface in accordance with their rights and freedoms as upheld by the First Amendment, despite accusations of racism, The Denver Post reported.

The photo, which shows three young men and a girl posing with dark paint on their faces and the caption “Wakanda forevaa” in an apparent reference to the 2018 Black Panther movie and comic book, was shared on Facebook by a user named Tay Anderson, who was outraged by the image.

“CSU Students wearing BLACK FACE! We should be outraged!!!!!!” Anderson wrote on 9 September, supported by other users who said that the students should be facing consequences for their actions.

It has been reported by the Daily Mail that the female student on the picture was later identified and even wrote an “apology” post on Facebook, which, however, has been deleted.

There have been no known comments from the other students, who remain unidentified.

However, the CSU administration decided not to take punitive measures against the group, despite sending a lengthy email to the students, staff, and faculty of the Fort Collins campus addressing the issue.

“Because of the long and ugly history of blackface in America, this photo has caused a great deal of pain to members of our community”, CSU President Joyce McConnell wrote. “We have heard from many of you — and we hear you. Moreover, we respect your voices. We know that images like this one — whether consciously racist or not — can perpetuate deliberate racism and create a climate that feels deeply hostile".

“We also affirm that personal social media accounts are not under our jurisdiction. Our community members — students, faculty and staff — can generally post whatever they wish to post on their personal online accounts in accordance with their First Amendment rights".

The letter also stated that the image did not violate any university rules, despite running counter to CSU’s principles, and thus the students will not face any consequences for their actions.

Many social media users, along with Tay Anderson’s followers, resented the news that no action against the group would follow, arguing that they were “appalled” by the image that it was “unacceptable”.

CSU students post themselves in blackface, and the president of the university sends and email to students saying people can post whatever they want to post. Once again, CSU disappoints me.

One recent incident involving “blackface” took place when US actress and stand-up comedian Sarah Silverman revealed last month that she had recently been fired from a movie after a 2007 picture of her wearing blackface during an episode of The Sarah Silverman Program was revealed to the public.