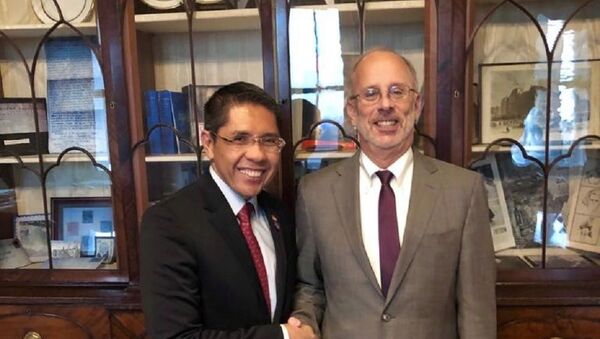 Following John Bolton’s sudden departure from the position of national security adviser on Tuesday, sources from the US administration claimed that Mike Pompeo might become the next person to take the post. Ex-Deputy National Security Adviser Charles Kupperman currently occupies the position.

Muslim civil rights group The Council on American-Islamic Relations (CAIR) is “appalled” by the appointment of Charles Kupperman as a temporary US national security advisor following John Bolton’s resignation. Kupperman’s historical involvement with the Center for Security Policy (CSP) that allegedly promoted anti-Muslim conspiracy theories is behind these sentiments, CAIR’s website reads.

“While we welcome the resignation of John Bolton, who has a long track record of promoting anti-Muslim policies and associating with hate groups, we cannot simply replace one Islamophobe with another,” said CAIR Executive Director Nihad Awad a day after Bolton’s resignation.

CAIR says their concerns are related to Kupperman serving on the CSP’s board from 2001 until 2010 while Frank Gaffney headed it. The Muslim group regards Gaffney as an “Islamophobe and notorious anti-Muslim conspiracy theorist” and a promoter of the idea that “Muslims in public service are infiltrating the government on behalf of the Muslim Brotherhood”.

CAIR’s website also cited Gaffney’s quote where he allegedly said that “most of the Muslim-American groups of any prominence in America are now known to be, as a matter of fact, hostile to the United States and its Constitution.”

“CSP has continuously promoted Islamophobic conspiracy theories, and anyone, like Mr Kupperman, who has so closely associated with them for so long is - at the very least - complicit in their brand of anti-Muslim bigotry and should not be entrusted with one of the highest-ranking security roles in the United States,” Nihad Awad added.

In January the group already expressed their concerns about Kupperman’s appointment as Deputy National Security Adviser following the same matters.

Charles Kupperman has been appointed temporary US national security adviser following John Bolton’s resignation with Donald Trump taking to Twitter on Tuesday, to announce that Bolton’s services were “no longer needed in the White House”. While Bolton insists that he resigned from the position by his own will, it is clear that he and the president had many disagreements between them, most notably concerning the Iranian issue.

In the meantime, Donald Trump stated that the new national security adviser would be named as soon as next week, meaning that Kupperman who was himself appointed by Bolton due to their similar views on many policies is not likely to remain in the job for long. It was recently reported that Mike Pompeo, who is currently the Secretary of State, could also become the second person in history to combine this position with the duties of national security adviser.