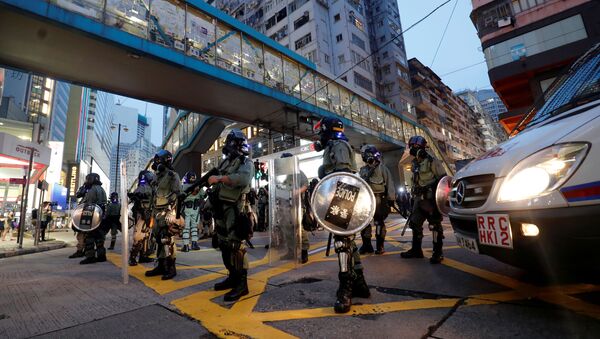 In anticipation of Washington moving to halt the sale of US-made tear gas to Hong Kong, Chinese suppliers of the noxious crowd control gas are preparing to pick up the slack and fill necessary orders to the semi-autonomous city.

Nearly three months after London banned the sale of tear gas and other munitions to the Hong Kong Police Force, US lawmakers in the House of Representatives proposed a bipartisan bill dubbed the PROTECT Hong Kong Act. If passed, the legislation would prohibit the commercial export licenses of nonlethal crowd control items, such as tear gas, to “Hong Kong Disciplined Services.”

While the total halt of exports would not occur until 30 days after the bill is enacted, suppliers in mainland China are on standby to assist the Hong Kong Police Force.

“It wouldn’t be too complex should there be any order coming from Hong Kong. A few trucks from Shenzhen could do,” Wang Zhuojian, owner of Jing Shi Security Technology and Defence Product Development in Guangzhou, told the South China Morning Post (SCMP) after Chinese Foreign Ministry spokeswoman Hua Chunying blasted the US’ PROTECT Hong Kong Act on Wednesday.

According to recent reports from the SCMP, the Hong Kong Police Force has gone through nearly 2,000 canisters of tear gas since anti-extradition protests began.

In addition to tear gas, Wang boasted that his company has over 20,000 “stab-proof body armor units” ready to go and can also supply authorities with other defense gear, such as batons and constraining forks.

Another sales official from mainland China who goes by the name “Zhong” told the outlet that China has recently started relying on its own domestically-constructed pieces of equipment rather than importing them.

“Actually the profit from exports is lower than domestic sales. The foreign orders tend to come in big amounts and are time-intensive,” he noted, explaining that exports to his company’s clients in Africa result in less profit than sales immediately within China.

According to his interview with SCMP, last month marked the first time the Hong Kong Police had purchased some 500 sets of anti-riot suits from a supplier in mainland China. Previously, police ordered around 400 suits from France.

“It is heavier than the tactical suit bought from France [following the 2016 Mong Kok riot], but its protection is better compared with the French suit,” one unnamed Hong Kong officer said following the delivery late last month. The suits each cost around 3,000 yuan ($420) a pop.