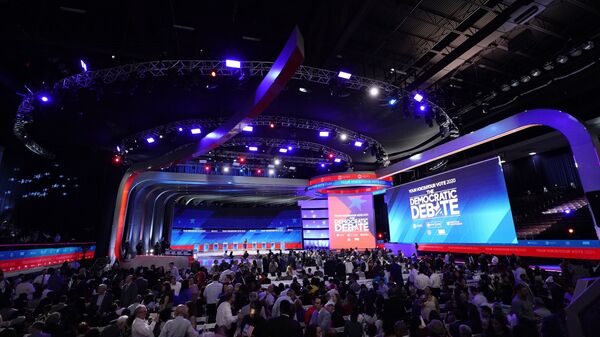 The third Democratic primary debate, held on Thursday, features 10 highest-polling 2020 presidential candidates, who will take the stage together for the first time in the campaign.

Unlike the format of the prior debates, this one will give candidates one minute and 15 seconds for direct answers to questions and 45 seconds for responses and rebuttals. Candidates will have the opportunity to deliver opening statements, but there will be no closing statements.

The debate is being held at Texas Southern University in Houston on Thursday night at 8 p.m. EDT and is reportedly slated to run for three hours.

When asked by a moderator about keeping her promise to bring troops home starting now, without a deal with the Taliban Massachusetts Senator Elizabeth Warren responded: "Yes!"

.@DavidMuir on the war in Afghanistan: "Would you keep that promise to bring the troops home, starting right now, with no deal with the Taliban?"

"My father grew up on a peanut farm in Asia with no floor. And now his son is running for president. That is the immigration story that we have to be able share with the American people [...] I’m going to say to immigrants come to America because if you come here your son or daughter can run for president", Yang said.

Andrew Yang: "My father grew up on a peanut farm in Asia with no floor. And now his son is running for president. That is the immigration story that we have to be able share with the American people." https://t.co/INdRXlIwFs #DemDebate pic.twitter.com/cbvqKXnZBa

"Racism in America is endemic. It is foundational...I'm going to follow Sheila Jackson Lee's lead and sign a reparations bill that will allow us to address this at its foundation. But we will also call out the fact that we have a white supremacist in the white house and he poses a mortal threat to people of color all across this country", Beto O'Rourke said standing on the stage of HBCU Texas Southern University.

Julián Castro chimed in, first praising O'Rourke for his response to the El Paso shooting, and then arguing that "we need to root out racism and I believe we can do that, because that doesn't represent the vast majority of Americans who do have a good heart. They need a leader to match that and I will be a president that matches that".

Booker, fielding a question from ABC News moderator, said a comprehensive criminal justice plan is central to combatting "systemic racism', in the US.

Yang has placed his flag pin on his right side.

According to the United States Flag Code Section 8(J), “The flag represents a living country and is itself considered a living thing. Therefore, the lapel flag pin being a replica, should be worn on the left lapel near the heart”.

Dover is ready to see @ewarren dream big & fight hard! We stan a woman with a plan! #Warren2020 #DemDebate3 pic.twitter.com/lFpG5nwpqR

"We're walking around with our heads down like “woe is me.” We're the best-equipped nation in the world to take this on. It's no longer time to postpone. We should get moving. There's enormous, enormous opportunities once we get rid of Donald Trump", Joe Biden said.

California Senator Kamala Harris targeted President Donald Trump: "But here's what you don't get. What you don't get you is that the American people are so much better than this. And we know that the vast majority of us have so much more in common than what separates us, regardless of our race, where we live or the party with which we're registered to vote [...] And now, President Trump, you can go back to watching Fox News".

Senator Elizabeth Warren talks up her Houston roots before touted why she should be at the top of the ticket: "I got my big opportunity about a half mile down the road from here at the University of Houston, back when it cost $50 a semester [...] I know what's broken, I know how to fix it and I'm going to lead".

According to ABC, citing sources, three persons already received the payment, bringing the total number of people receiving the dividend to 13. He will reportedly use campaign funds to make the payment.

ABC moderator Jorge Ramos started the debate by speaking in Spanish: "Despite the fact that we are experiencing difficult times, this is our country, too".

"I may not be the loudest person up here, but I think we've already got that in the white house. Houston, we have a problem. This -we have a guy there that is literally running our country like a game show. He would rather lie than lead",  Klobuchar said.

"There will be life after Donald Trump. But the truth is that our problems didn't start just with Donald Trump and we won't solve them by embracing old ideas. We need a bold vision [...] We have to win... it's what I can do in this race get back Michigan, Wisconsin and Pennsylvania, Florida, Georgia and Arizona and finally turn Texas blue and say good-bye to Donald Trump", Castro said.

The candidates took the stage in Houston, Texas, for the 2020 Democratic debate:

Democratic presidential hopeful Andrew Yang and Republican Senator Ted Cruz challenged each other ahead of tonight's debate in Houston to a basketball game.

Sorry. You gotta poll at 5% or more to play on my court. https://t.co/xRx6VYdWft

Hmm. You’re taller than I am. From the video, you’re probably a better shot. And, I’ve seen you dunking (on an 8-foot rim). Altogether, pretty strong. So....... https://t.co/hVlhDfKS1W pic.twitter.com/cMepUnKWlu

Let’s make this clear. I don’t care who your preferred Democratic candidate is; Joe Biden, Elizabeth Warren, Bernie Sanders, Kamala Harris. We must all get behind the nominated candidate 100%. Even Yang. We cannot risk 4 more years of this Trump administration #DemocraticDebate

The gun safety movement in Texas has never been stronger💪💪💪! I’m so proud to be here at the #DemocraticDebate with fellow @MomsDemand volunteers. Every single one of us will demand a presidential candidate who makes gun safety a priority! #ExpectUs @Everytown pic.twitter.com/2UqRqgK8a4

when Bernie and Warren tag team and take down Biden at tonight’s #DemocraticDebate >>> pic.twitter.com/ZeZ6OvDH76