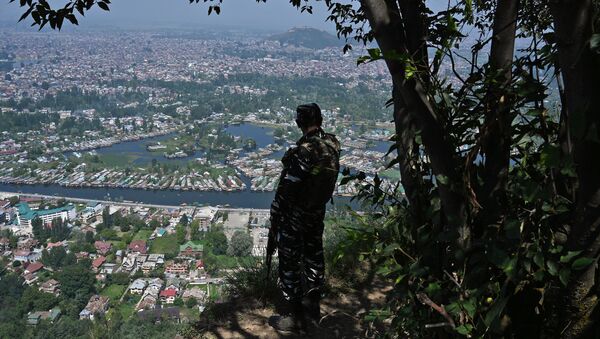 © AFP 2021 / TAUSEEF MUSTAFA
Subscribe
New Delhi (Sputnik): A day ahead of a big rally by Pakistani Prime Minister Imran Khan in Muzaffarabad - the capital of Pakistan-administered Kashmir - India has made a strong statement about retrieving Kashmir from Islamabad.

With some Indian ministers underlining the need to discuss Pakistani-administered Kashmir, the Indian Army chief has said the troops always remain ready mode whenever the government wants them to go ahead and retrieve that side of Kashmir.

"The government takes action in such matters. Institutions of the country will work as per the orders of the government. The army is always ready", said General Rawat while replying to the media on Thursday.

Two key ministers recently said Pakistan should stop talking about the Indian state of Jammu and Kashmir, if they wish to discuss it in near future it should be only about the Kashmir presently being administered by Islamabad.

"Now, the next agenda is retrieving Pakistan-administered Kashmir and making it a part of India. It's not only me or my party's commitment, but it's a part of a resolution unanimously passed by Parliament in 1994 during a Congress government headed by PV Narasimha Rao", Union Minister Jitendra Singh said on Tuesday in Jammu.

Indian Defence Minister Rajnath Singh has also said India will hold talks with Pakistan only on the issue of Pakistan-administered Kashmir.

The two countries have been engaged in bitter diplomatic barbs including massive firing at the border since 5 August when New Delhi abrogated the special status of Jammu and Kashmir. Pakistan later recalled their diplomats from India and stopped trade with India.

Pakistan has claimed New Delhi’s decision violates the five decades old Simla Agreement and that UN should take action on the matter immediately to avoid any conflict between the two nuclear armed nations.

000000
Popular comments
If one have the mouth to do the talk, it should have the leg´s to do the walk against a nuclear country that isn´t willing of loosing part of he´s teritory. dare so.