'I Can Never Be 100% Sure With Boris' - Political Commentator 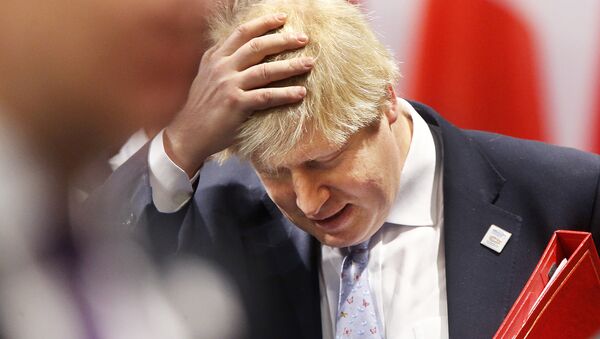 © AP Photo / Michael Probst
Subscribe
The UK government has published details of its Yellowhammer contingency plan for a No-Deal Brexit after MPs in the House of Commons voted to force its release.

The paper lists rioting, food price rises and reduced medical supplies as real risks of the UK leaving the EU without a deal, but critics have been quick to label the document "Project Fear mark two".

Sputnik: First of all, can I just get your reaction to the Yellowhammer documents being released?

Mandy Boylett: Well, I think you have to look at who gave the advice, the guy who gave the medical advice, saying that we're going to be [having] shortages of drugs. He's an actually an avid Remainer. To be honest, I think it's just Project Fear mark two. It wouldn't surprise me if there's the odd glitch in the supply chain. But with good planning, this will all sort itself out, and new supply chains will be worked out. To be honest, I think the alluding to civil unrest, I think there's going to be your chance of civil unrest if we don't actually get the Brexit that we all voted for.

Sputnik: What do you think about Boris Johnson's current negotiation tactics with the EU? Do you think he's really looking for a new deal?

Mandy Boylett: I think he's a bit stymied by Parliament at the moment. I did think he was after 'No Deal'. I can never be 100% sure with Boris, because I'm not sure how much of a Brexiteer he is and how much of a politician he is. I'm not sure what he really feels inside or if he's playing a game. I was certainly encouraged by his saying, "We're going to leave on the 31st of October, do or die". Unfortunately, we've got, we've had a very much 'Remain' speaker, who has acted in very bad faith, and he's clearly being biased.

Also, we've had this Fixed-term Parliaments Act that has been used for a purpose it was never intended to be used for by basically making the prime minister of the UK something of a puppet. I think that's constitutionally wrong. I think the law is bad. I think it needs looking at. But having said all that, I honestly don't know what what's going through Boris's mind now. But I suspect he might be trying to rehash Theresa May's old deal. Putting lipstick on a pig as it were? To see if you can get something agreed before the 31st of October?

Sputnik: There's been a lot of talk about some sort of agreement between the Brexit Party and the Conservative Party. Do you think the two will be able to come to an arrangement prior to a general election?

Mandy Boylett: Well, I would want that to be the case, especially as you've got a lot of Leave voters in Labour constituencies. The constituency I stood in Stockton North voted 65% Leave, but the Tories never do well there. And it would make so much sense to come to some sort of agreement where the Brexit Party was more prominent in the Leave-supporting seats, where the voters couldn't bring themselves to vote Conservative and for the Brexit Party, where maybe some of the more Southern constituencies where the Tories do better to stand out.

It seems to me that- it honestly seems to me that Dominic Cummings is too snobby to have an arrangement with Nigel Farage. It seems to me that he looks down on him in some way. Yet the reason we actually got Brexit is because of Nigel Farage; he's a very clever man. A lot of people really listen to what he says. And certainly, in dealing with the EU, there's nobody with more experience. I'm not sure with Dominic Cummings in charge that there will be a deal between the Tories and the Brexit Party, but I believe there certainly should be.

Sputnik: Do you think will be leaving the EU on the 31st of October this year?

Mandy Boylett: No. Sad to say.  I hope we are. I really, really hope we are. But I just think the Parliament and the institutions are all so tied up with being Remainers that it seems that they will do anything to stop us leaving. So now I don't know. But I would hope to be proved wrong.

The views expressed in this article are solely those of Mandy Boylett and do not necessarily reflect the official position of Sputnik.