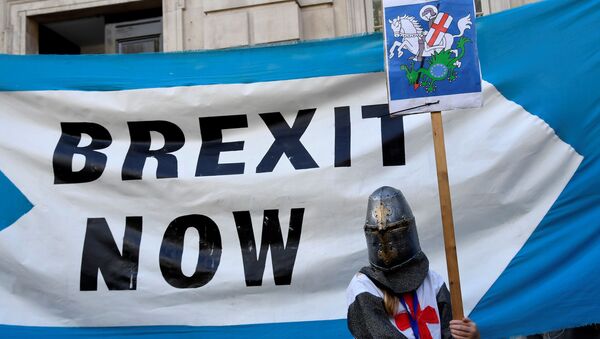 © REUTERS / TOBY MELVILLE
Subscribe
The scenario was published two days after UK lawmakers voted to oblige the government by publish the impact assessments for a no-deal Brexit. The motion also required the UK government to publish communications between officials over their plans to suspend Parliament weeks before the Brexit deadline.

The UK government published the so-called Operation Yellowhammer worst-case planning assumptions as of 2 August in case of a No-Deal Brexit.

According to the worst-case scenario, cross-channel traffic could be cut by 40-60 percent within one day, with the worst disruption supposed to last for 3 months.

"Some cross-border UK financial services will be disrupted. Law enforcement data and information sharing between UK and EU will be disrupted. UK nationals will lose their EU citizenship and, as a result, can expect to lose associated rights and access to services over time, or be required to access them on a different basis to now", the document says.

Notably, "Gibraltar, due to the imposition of border checks at its border with Spain (and the knock-on effect of delays from the UK to EU), will see disruption to supply of goods (including food), medicines, trans-frontier shipment of waste and delays of 4+ hours for at least a few months in the movement of frontier workers, residents and tourists across the border. Prolonged border delays over the longer term are likely to adversely impact Gibraltar's economy. Like the UK mainland, cross-border services and data flow will also be disrupted. Despite the time extension of EU exit, Gibraltar has still not taken decisions to invest in contingency infrastructure (port adjustments; waste management equipment) and there are still concerns that Gibraltar will not have passed all necessary legislation for No Deal, opening up potential legal gaps/risks mainly for the Government of Gibraltar. Gibraltar continues to plan for less significant border delays than our Yellowhammer scenario. Crown Dependencies may be affected by supply chain disruption".

In addition to this, UK citizens traveling to and from the EU may be subject to increased immigration checks at EU border posts, while some cross-border UK financial services could be disrupted.

While the demand for energy will be met and the government expects no disruption to electricity or gas interconnections, the availability of certain types of foodstuffs will decrease.

"Low-income groups will be disproportionately affected by any price rises in food and fuel."

The UK government also fears that a No-Deal Brexit could trigger protests and counter-protests across the country, which could absorb large amounts of police resources, according to the Operation Yellowhammer.

Article 15 remains classified in the document.

The Yellowhammer scenario warns that it is highly likely there will be "anger and frustration in the UK catching sector, which could lead to both clashes between fishing vessels and an increase in non-compliance in the domestic fleet".

Last month, the Operation Yellowhammer was leaked to the UK-based media. The document offered a glimpse into covert planning carried out by the UK government to avert a potential collapse in British infrastructure if London leaves the European Union without a transition Brexit deal.

The publication follows a vote by UK lawmakers, forcing the government to publish its impact assessments for a No-Deal Brexit, including informal communications through such channels as Facebook, WhatsApp and Telegram.

In 2016, UK citizens in a referendum voted to leave the European Union. The country was initially set to withdraw from the bloc in March but UK lawmakers have not endorsed the Brexit deal agreed upon by London and Brussels, and the deadline was moved to 31 October.

Since the beginning of his tenure, UK Prime Minister Boris Johnson promised that the commonwealth would withdraw from the bloc with or without a deal.

000000
Popular comments
And the sun will stop shine...
Hirondelles45
11 September 2019, 23:38 GMT2
000000
lol, scaremongering for the degenerated eejits who can't think anyway and certainly the jews, who are scared all of their lies will be fully exposed in the near future.