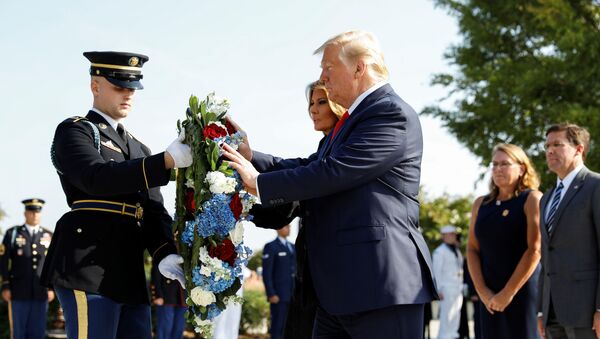 The day before, the Taliban vowed to continue fighting against American forces in Afghanistan after Donald Trump withdrew from peace talks with the group.

Speaking at the 9/11 commemoration event, US President Donald Trump said that over "the last four days" US forces have "hit our enemy harder than they have ever been hit before and that will continue."

In his speech, Trump referred to the Taliban movement, several days after he called off secret Camp David meetings with the group and Afghan President Ashraf Ghani.

"We had peace talks scheduled a few days ago, I called them off when I learned that they [Taliban] had killed a great American soldier from Puerto Rico and 11 other innocent people," Trump said. "They thought they would use this attack to show strength, but actually what they showed is unrelenting weakness. The last four days we have hit our enemy harder than they have ever been hit before and that will continue.”

President Trump says after an American soldier was killed last week in Kabul he called off peace talks with the Taliban at Camp David and the U.S. military hit back “harder then ever.” Warns terrorists against future attacks saying response will be overwhelming, but not nuclear. pic.twitter.com/Wp8kHAkx5N

​Trump warned that any other terrorist organisation that carries out an attack on US soil will be met with power that the United States has never used before.

However, Trump clarified that he was not talking about using nuclear weapons.

The day before,  the Taliban vowed jihad against American soldiers in Afghanistan amid Trump's cancellation of peace talks with the group.

The move was prompted by several terrorist attacks conducted in early September and claimed by the Taliban. On 2 September, a huge explosion hit Kabul's PD9 district, where foreign troops and agencies are located, just hours after US Special Representative for Afghanistan Reconciliation Zalmay Khalilzad‏ shared with the nation's leadership the details of a peace deal drafted during the ninth round of talks in the Qatari capital of Doha.