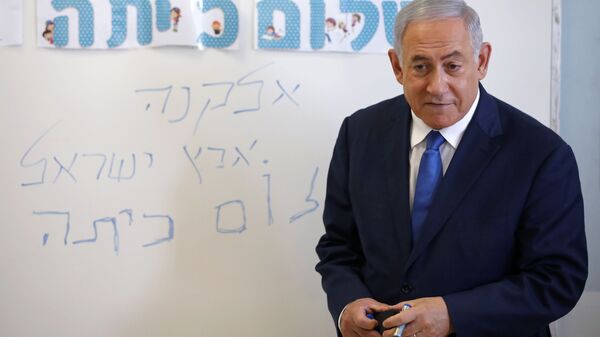 MOSCOW (Sputnik) - The implementation of the plan voiced by Israeli Prime Minister Benjamin Netanyahu to extend Israeli sovereignty to the Jordan Valley may escalate tensions in the region and undermine hopes for a Palestinian-Israeli settlement, the Russian Foreign Ministry said in a statement.

"Moscow noted Israeli Prime Minister Benjamin Netanyahu's statement, which provoked a sharply negative reaction in the Arab world, about the intention to extend the sovereignty of Israel to the Jordan Valley. We share the concern about such plans of the Israeli leadership, whose implementation could lead to a sharp escalation of tension in the region and undermine hopes for a long-awaited peace between Israel and its Arab neighbours", the ministry said.

The statement comes a day after Netanyahu announced that the Israeli government would extend Israel's sovereignty to the Jordan Valley in the West bank if he was re-elected. Netanyahu planned to take the first steps immediately after the formation of a new cabinet after the elections to the 22nd Knesset, to be held 17 September. The prime minister also noted that more West Bank settlements will follow suit after the US President Donald Trump administration publishes its "deal of the century" peace plan in full.

In response, PA leader Mahmoud Abbas threatened to pull out of agreements signed with Israel if Netanyahu fulfilled his promise, according to Al Jazeera Channe.

The announcement has also triggered harsh reaction from the Arab League, with the organisation indicating that the annexation of parts of the West Bank would violate international law and UN resolutions.

Israel was forced to call a snap general election after Netanyahu failed to form a government following the previous election in April.

For decades, the Israelies has been in conflict with Palestinians, who have been seeking diplomatic recognition for their independent state on the territories of the West Bank, including East Jerusalem, and the Gaza Strip.