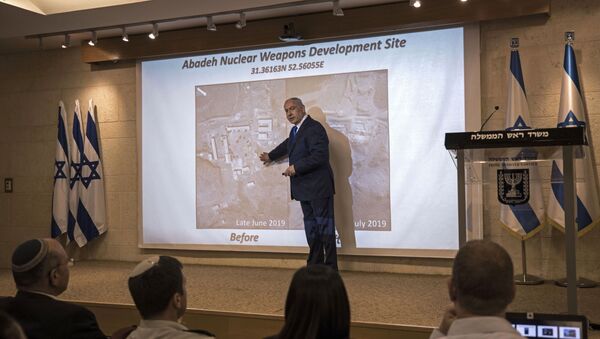 On Monday, Netanyahu, revealing what is claimed to be another portion of an Iranian nuclear archive, declared that Israeli intelligence had evidence of a secret nuclear weapons development site in central Iran. According to the Tel Aviv PM, following Israel's inquiry with Iran concerning the site, Tehran moved to destroy all evidence. At a political campaign rally on Tuesday, Netanyahu announced that Israel would take steps to seize new territory in the Jordan Valley immediately after forming the new government.

"One day, Netanyahu spreads accusations against Iran; the next day he announces his own evil intentions to annex parts of Palestine, thus seeking to get votes to stay in power," Mousavi stated.

Israel was forced to call snap elections - slated for 17 September - after Netanyahu failed to form a coalition government following a previous vote in April.

A pre-election period in Israel is traditionally accompanied by rising tensions with Palestinians who seek diplomatic recognition of their independent state on territories of the West Bank, including East Jerusalem, which are partially occupied by Israel, and the Gaza Strip.

The Israeli government has refused to recognize Palestine as an independent political and diplomatic entity and continues to build settlements in the occupied areas despite objections from the United Nations.