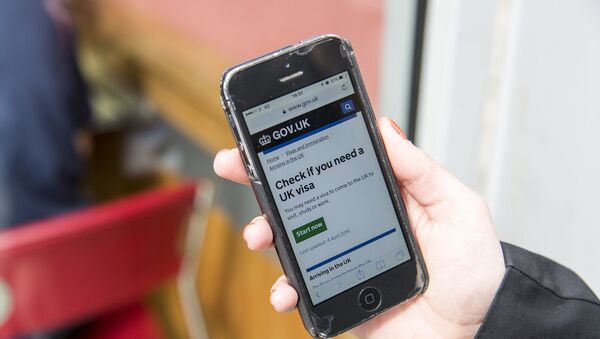 CC BY 2.0 / GRAHAM HIGGINS / GOV.UK Users
Subscribe
New Delhi (Sputnik): A wave of jubilation gripped many Indians on Wednesday as the British government announced the return of a post-study work visa facility for international students.

The Indian government had been demanding the revocation of restrictions on post-study work visas for years, as Prime Minister Narendra Modi has raised the issue during bilateral interactions with his counterparts on several occasions. In 2016, Modi conveyed to then visiting Prime Minister Theresa May that easier visa norms for Indian students would “define the contours of future bilateral engagement”.

The British government's latest decision has spread a sense of jubilation among many Indians waiting to avail such an opportunity.

“This is great news for UK business communities and universities”, said a businessman having interest in Britain.

Delighted with reintroduction of a 2-year post-study work visa by @10DowningStreet @ukhomeoffice -This is great news for UK business communities and universities & will help boost 🇬🇧🇮🇳 relations & collaborations.
India Business Group has long campaigned for this to be restored. pic.twitter.com/QGUbLfgwSC

​The decision came days after India held a high-level policy dialogue with the British government.

Another group - Manchester India Partnership - called the decision “fantastic news for Indian students”, claiming that the decision will strengthen economic ties between Manchester and India.

However, some of the people are citing Brexit as being behind the move, as they said: “Brits have little choice. The Brexit uncertainty and ever increasing Islamisation of British society and polity, UK's attractiveness as an 'educational tourism' destination is rapidly declining”.

The Brits have little choice. The Brexit uncertainty and ever increasing Islamization of British society and polity, UK's attractiveness as an "educational tourism" destination is rapidly declining. This visa extension sop is a step towards maintaining the GBP inflow from India.

​Vijay Chauthaiwale, who heads the governing BJP's foreign policy cell, termed it a “long overdue step in the right direction” by the British government.

However, some users speculated that the demand for full-fee paying places at UK universities for international students would shrink.

Immigration will likely increase after Brexit as UK 'ex-pats' return and countries like India demand lots of visas as a condition of trade deals. Still, at least the demand for places at UK Universities for lucrative (full-fee paying) places for international students will shrink

​In 2012, the British government cancelled a post-study work visa that had allowed international students to work for two years after graduation. After the decision, the number of Indians enrolled in British universities dipped drastically. As per the official data available, the amount of Indian students dipped from a high of 39,090 in 2010-2011 to 16,550 in 2016-17.

“Of the 750,000 Indian students studying abroad in 2018, fewer than 20,000 were in the UK—two-thirds the number in New Zealand”, the Foreign Affairs Committee - a cross-party committee of British MPs appointed by the House of Commons  to scrutinise the government on foreign policy - said in its recent report.