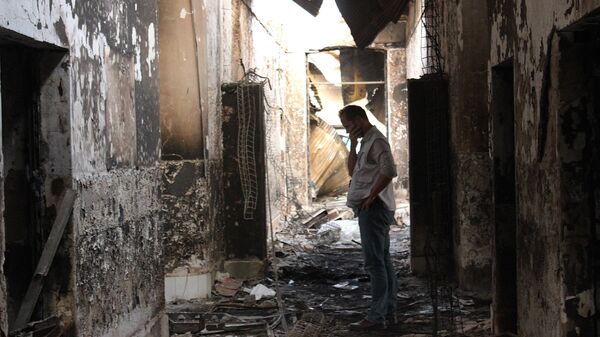 On the 18th anniversary of the September 11 terrorist attacks, it’s time to take measure of the destruction wrought by the US in the crusade ostensibly launched in pursuit of the attacks’ perpetrators.

In one month’s time, people born after the beginning of the US war in Afghanistan, launched against al-Qaeda in the days following the September 11, 2001, attacks, will start to become old enough to fight in that war, which continues to rage as peace talks with the Taliban fell apart earlier this week.

The suicide plane attacks on the Pentagon in Virginia and the World Trade Center towers in New York killed over 3,000 people, including passengers on a fourth airliner who fought back against the hijackers before their jet crashed in a Pennsylvania field. However, the wars in Afghanistan and later Iraq, Syria, Somalia and Yemen, all justified in some way or form by the alleged pursuit of the al-Qaeda terror network responsible for the attacks, have gutted whole societies, killing many thousands of times the number who perished on that day, David Swanson, activist, journalist, radio host and author of the book "Curing Exceptionalism," told Radio Sputnik’s By Any Means Necessary Wednesday.

“But in terms of 9/11 in the United States in the year 2001, clearly, indisputably, the damage inflicted on the United States by itself in response to 9/11 over the past 18 years has far outstripped the damage of that day,” he said, noting the overall harm inflicted by the US on other parts of the world over the course of its history is “many thousands of times greater.”

“It’s just outrageous that anyone would be focused on such a relatively small disaster, when it’s been used as part of the propaganda for such vast disasters as the destruction of Iraq and Afghanistan and the turmoil created, and the death and suffering, and environmental destruction, across the whole Middle East and Central Asia and North Africa,” Swanson told hosts Eugene Puryear and Sean Blackmon.

“To look back and say, ‘Well we can’t have the president have a meeting that has anything to do with peace anywhere near the anniversary of this holy day, which we use to sanctify our wars’ - not that the meeting Trump was proposing had much to do with peace - but that was the response from the corporate media in the United States.”

However, Swanson noted the 2001 attacks served as an excuse for the US state to “inflict massive damage on US society” as well, “not just in terms of the wars and the blowback, but the militarization of the police; the criminalization of whistleblowing; the normalization of imprisonment without charge or trial that’s now being converted into a tool for going after immigrants; the acceptance of torture and of assassinations and of secret CIA operations; the endless tearing down of this society and the fueling of xenophobia and bigotry and anti-Muslim and racist hatred,” he said.

“You wouldn’t have Donald Trump or anything associated with him without this misuse of September 11 over the past 18 years. The damage, the shifting of resources to militarism and secrecy and so-called ‘security.’ The criminalization of everyone, the treatment of people as criminals when they pass through airports or government buildings - it’s been an utter disaster,” Swanson said.

“If anyone was responsible for 9/11 and still thinks of it as a good thing to have attacked and inflicted damage on the United States, they must be cheering for everything that the United States has done to magnify that damage manyfold,” Swanson told Sputnik.

However, 18 years later, the Pentagon has finally shifted its focus away from the War on Terror as its primary geopolitical concern. In February 2018, US strategists announced a new focus: “great power competition” with “revisionist powers” China and Russia, which ostensibly seek to overturn the unipolar world order dominated by the United States since the end of the Cold War.

As a result, the Pentagon has once again picked up weapons programs designed for mass conflict, such as long-range missiles, stealth aircraft and even nuclear weapons, putting away the IED-proof trucks designed to survive the Iraqi insurgency - or in many cases, giving that weaponry to US police forces stateside.

“I think Russiagate has been the big new development that some in the Pentagon and in the weapons industry still have hope for,” Swanson said, noting that in the 30-year absence of a looming power like the Soviet Union, US propagandists had labored to portray other US adversaries, such as Daesh and al-Qaeda, as equal in malevolence and danger. Although Russiagate’s “major claims have famously collapsed, it doesn’t seem that that necessarily is going to make any difference in terms of the general consciousness of people in the United States. There’s just this assumption that Russia and China are somehow enemies.”