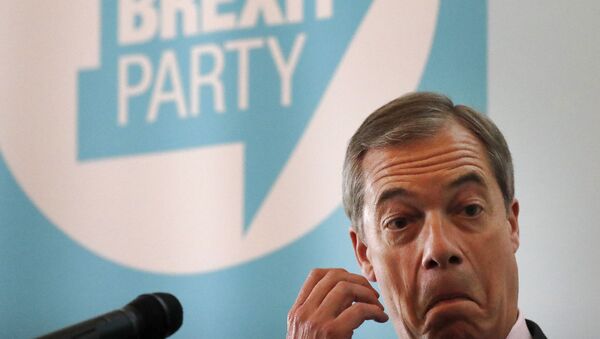 Demond Cureton
All materialsWrite to the author
The news comes after the British PM had been offered non-aggression pact by Brexit Party leader Nigel Farage in exchange for backing a no-deal scenario and Tories standing aside in over 80 seats.

UK prime minister Boris Johnson will not be doing a deal with Brexit Party leader Nigel Farage, a UK spokesman confirmed on Wednesday.

Neither Mr Farage or [Leave.EU cofounder] Arron Banks were "fit and proper persons" and should "never be allowed anywhere near government," a senior Tory source allegedly said as reported by Jason Groves, Daily Mail political editor.

Boris Johnson rules out election pact with Brexit Party. Senior Tory source: ‘Neither Nigel Farage not Arron Banks are fit and proper persons and they should never be allowed anywhere near government’

The rejection could signal that Johnson will favour a softer Brexit deal with Brussels amid increasing pressure to avoid an economic rupture and mounting concerns over the Irish backstop, which the PM adamantly opposes.

News of this was evidenced by UK business secretary Andrea Leadsom, who hinted on BBC Radio 4's Today programme that the Prime Minister was seeking softer options for a Brexit deal with Brussels.

But Mr Farage urged Boris Johnson to join forces in favour of a no-deal Brexit amid rumours that No 10 is attempting to push forward former PM Theresa May's embattled EU withdrawal agreement.

The latest developments come after the Brexit Party published adverts in the Daily Express on Wednesday, where Farage sought an "election offer" to forge an alliance with Downing Street in order to keep a majority in parliament.

The Brexit Party leader said that without a 'clean-break' Brexit, Tories would take a "real kicking" in future elections and would fail to keep a majority in Parliament. Farage said that it was 'clear' that an election would take place soon and that loyalties to traditionally supported Labour and Tory parties were changing over Brexit.

In insulting @Nigel_Farage the Tory leadership insults millions of Leave voters who have lost faith in the Conservatives to deliver Brexit. A bewildering election strategy from a party in total disarray

“If we go beyond the 31st of October and we are still a member of the European Union - which looks increasingly likely - then a lot of votes will shift from the Conservative Party to the Brexit Party,” Farage said in a statement to reporters.

He added: “The Conservatives will take a real kicking from Nov. 1 onwards. I very much hope that Boris Johnson will simply look at the numbers. If we stand against them, they cannot win a majority.

These look like comments from deep inside the bunker.

1. Arron Banks is not in The Brexit Party.

2. I do not want a job in government, I just want to put country before party and deliver a clean break Brexit. https://t.co/sIUXJh9Q0G

The news comes after Johnson lost his working majority in Commons after Dr Phillip Lee defected to the Liberal Democrats whilst the PM was delivering a speech on Brexit on 4 September. Mr Johnson suffered further setbacks after a Commons opposition alliance led by Labour leader Jeremy Corbyn ordered him to request to push back Brexit until January 2020 unless he could strike a deal at an upcoming EU summit on 17-18 October.

After taking away the whip from 21 Tory 'Rebel' MPs, which forced the group to stand as independents in Commons, Boris Johnson saw a wave of criticism from across the political spectrum, including his former colleagues, as well as a host of resignations, including Scottish Tory leader Ruth Davidson and his own brother and Cabinet minister, Jo Johnson.

Despite pledging numerous times to withdraw from the EU with or without a deal, Boris Johnson's rejection could signal further headaches for Conservatives whom many voters could see as backtracking on their promises and failing to deliver Brexit as per the 2016 EU referendum. The Brexit Party, under Farage, party chairman Richard Tice, and others, have introduced most of their roughly 650 parliamentary candidates across constituencies in the United Kingdom as part of their plans stand in a future snap election and push a no-deal withdrawal from the EU.