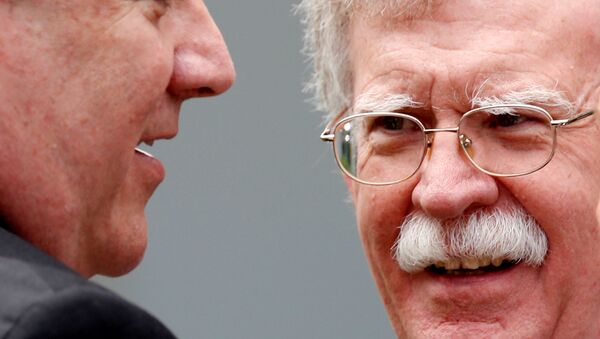 Following his firing of National Security Adviser John Bolton Tuesday, US President Donald Trump is attempting to find another individual to accept the job - for the fourth time in his presidency. Though the choice appears to be Trump’s alone, there are some other key players and countries that may have a say.

Trump struck a chord with much of the American public in 2016 by propping himself up as an individual lacking the corruption of career politicians and by saying that he was going to pull US troops out of “never-ending” wars in places like Afghanistan. He particularly expressed in a September 2016 speech to The Union League of Philadelphia that he was “proud to have the support of warfighting generals, active duty military, and the top experts who know both how to win – and how to avoid the endless wars we are caught in now.”

However, with his past appointment of Bolton, a known war hawk, and his recent, abrupt change of heart on the peace deal meetings with Taliban leaders and Afghan President Ashraf Ghani, it’s unclear whether Trump is willing or able to follow through on some of his original promises to the American people and the world over.

Daniel McAdams, executive director of the Ron Paul Institute for Peace and Prosperity, joined Radio Sputnik’s Loud and Clear on Tuesday to give his thoughts on what provoked Trump’s firing of Bolton and explain what, or who, may be keeping the US president from pulling out of Afghanistan.

McAdams explained that Bolton’s hawkish ways caught up with him following a number of disagreements with the US president, especially pertaining to the failure of the second Trump-Kim Jong Un summit in Vietnam and Bolton’s actions concerning Iran.

“He torpedoed any kind of rapprochement with Iran when - at least from what my sources tell me - he was freelancing when [Mohammad Javad Zarif], the foreign minister of Iran, was … sanctioned personally.”

McAdams noted that two days prior to Trump’s announcement about Bolton, he was on a panel and mentioned that Iran is the “elephant in the room,” because the US, Saudi Arabia and Israel do not want to end their “encirclement” of the region.

“That is the goal of the military-industrial complex,” McAdams stressed. “We can’t ignore the fact that both the Israelis and the Saudis want the US to fight their battles against Iran. And so you have two pretty powerful regional countries who are also going to be arguing about any kind of pullout. It’s going to be very, very tricky.”

McAdams went on to say that even if Trump himself wants to get out of Afghanistan in a move to fulfill a campaign promise and boost his chances of presidential re-election, there are two problems “just as bad as Bolton” in the administration: Vice President Mike Pence and Secretary of State Mike Pompeo.

“Pence openly broke with the president over this Afghanistan deal. Pompeo thinks that he’s the next person for the White House - which is, you know, deluding himself,” McAdams said. “It does make you think that he is going to have to replace Bolton with a big personality.”