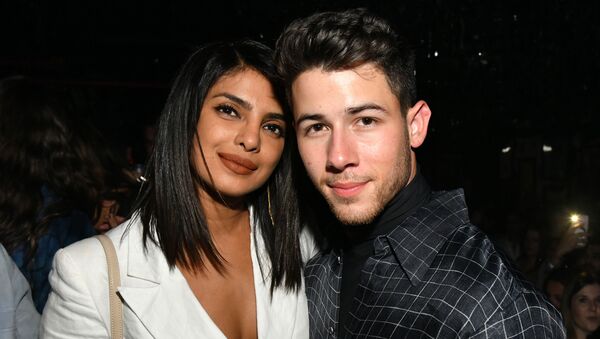 © AFP 2023 / Craig Barritt
Subscribe
International
India
Africa
New Delhi (Sputnik): With the trailer to Priyanka Chopra's Bollywood comeback film "The Sky is Pink" set to come out on Tuesday, the Bollywood actress-turned-global icon walked down memory lane and revealed interesting insights into her wedding planning process during the shooting of the film.

It turns out that it was hubby Nick Jonas who made significant preparations for their extravagant wedding in India in December 2018, Priyanka revealed in an interview for Entertainment Tonight.

Miss India – 2000 crown winner Priyanka exchanged wedding wows with Nick Jonas in a three-day event in India, with both a Christian service and a traditional Indian wedding ceremony.

"Nick had come down to India because he was handling logistical things with the wedding planners while I was wrapping up a movie," said Priyanka who earlier revealed that the final scene of her upcoming film left Nick teary-eyed.

She also added that this is the best thing about Nick and her relationship as they both give priority to their work, and strive to support each other.

"He used to come to the set for just a little bit, and then return, so having him around, my brain was like, 'Alright, this is all sorted. I don't have to stress out. He's handling it; he's doing the heavy lifting," she added.

She also gushed about the fact that the film "The Sky is Pink" was her first project in which she used the name Priyanka Chopra Jonas.

"Oh my gosh, that just made it official, I guess, now that it's in my credit," she said. "[I'm] clearly not used to it. I guess it's very, very fitting because I got married during this movie."

Priyanka took to Twitter today to unveil the trailer of her film calling it a "milestone moment" for her.

Presenting the trailer for #TheSkyIsPink- a film about love, made with so much of it! It's a very proud milestone moment for me, because it’s my first as an actor & co-producer. Hope it gives you all the feels & inspires you to celebrate life!https://t.co/eJuCD371iR pic.twitter.com/k05cY6AkD2

The film set to release on 11 October 2019 is directed by Shonali Bose, starring B-Town hunk Farhan Akhtar against PeeCee. It is a love story about the parents of a teenage girl and also highlights the issue of pulmonary fibrosis disease.