‘It was a Great Hunt’: Khabib Takes to Instagram After Legendary Fight 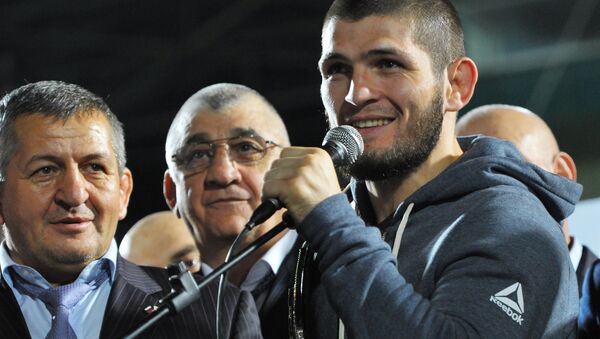 Dagestan-born Russian fighter Nurmagomedov took to his Instagram account to comment on the match in which he defeated American lightweight fghter Dustin Poirier in Abu Dhabi on Saturday, by saying “it was a great hunt”.

Это была славная охота )))) it was a great hunt. 🦅 #Repost @akajav ・・・ This fight will always be one of best ever with @khabib_nurmagomedov because I got the opportunity to share this victory with his Father who I admire as a Father and Great Coach🦅🦅🦅 Khabib has been with me since his 2nd @ufc fight and this was the 1st time I got to work alongside his Father. I look forward to working with Him on the next one👍🏽🦅🦅🦅#greatcoach photo credit Mexican Gangster @frujuice_athletics #

The remark came as the UFC champion was commenting on a post by his head coach Javier Mendez in which  the latter stated that for him this was “one of the best” fights with Nurmagomedov, because he “got the opportunity to share this victory with his [Nurmagomedov’s] Father and Great Coach”.

This was the 28th consecutive victory for the Dagestani fighter.  He defeated his American opponent by using a rear naked choke against him in the third round.

Poirier also addressed his fans on Monday, by thanking everyone for their support and arguing that he was “down but not out”.

“Didn't get the result I wanted Saturday. This is what happens sometimes when you're chasing greatness. I gave this my all. I'm down but not out", Poirier wrote on his Instagram, “Thank you to everyone for the kind messages and support. It means the world to me. This one really hurts. It's a hurt that im [sic] very familiar with...”

Didn't get the result I wanted Saturday. This is what happens sometimes when you're chasing greatness. I gave this my all. I'm down but not out. Thank you to everyone for the kind messages and support. It means the world to me. This one really hurts. It's a hurt that im very familiar with...

Fans and other celebrities expressed support for Poirier, with actor Tommy Chong writing “keep your head up” and Ed Bassmaster commenting “still a boss!”

In a comment to BT Sport following the defeat, Poirier also said that this loss would “live with him forever” and that he was going to “beat himself up for the rest of his life” wondering if he could have done more.

For his part, the Russian fighter said that he would support Poirier’s The Good Fight foundation, which has been raising money for social causes by selling his T-shirt from the fight.

"I know that Dustin is doing charity. I am going to sell this T-shirt and invest the money into the charity fund led by Dustin", Nurmagomedov said in an interview with Russia's Channel One.

The Dagestani fighter also did not miss the opportunity to fire some shots towards his old rival Conor McGregor, whom he defeated by submission in October of last year.

"Why do we have so much more respect between us than the last fight? You know this b***t guy [McGregor] that I had a lot of crazy stuff but I want to forget everything," said Khabib. "We show what this is in MMA that No. 1 is respect. That is what your coach teaches you first that you have to respect the gym, your teammates and to clean the gym. MMA is not about trash talking and this is what we show."

Khabib was previously suspended for 9 months after a brawl with McGregor at UFC 229 in Las Vegas in October 2018. The bout against Poirier was his first since the suspension.

After Saturday's fight in Adu Dhabi, Nurmagomedov is likely to take a short rest before moving on to his next match with US mixed martial artist Tony Ferguson.