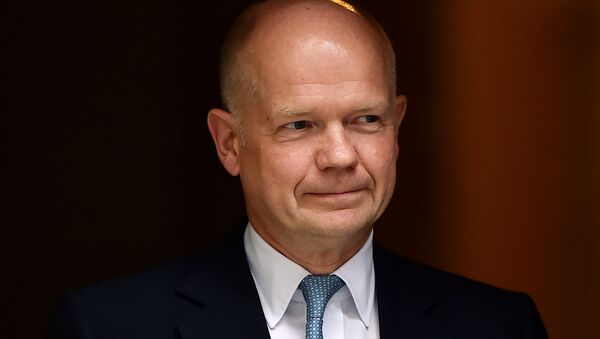 He branded the move a "serious miscalculation" and “misjudgment”, arguing it would make winning a future general election harder for the Conservatives as it left the party "more exposed to further defeats and humiliation".

Former Conservative leader William Hague has viciously slammed Prime Minister Boris Johnson over his decision to expel 21 rebel MPs from the party, calling the move "the most egregious and counter-productive act of self-harm committed by the party leadership" in his lifetime.

"Their expulsion from the parliamentary ranks of the Conservative Party, partly at the behest of people who have spent years rebelling, is a disgusting act of hypocrisy," Hague wrote in a column in the Telegraph 9th September.

Hague nonetheless warned disgruntled MPs against inflicting further damage on the Conservatives, stating Britain needed “a strong and united party of the center-right” rather a “battleground of extremism” and urging Johnson to use the Conservative conference at the end of September to restore order and make the party “inclusive and welcoming” anew.

Johnson expelled the MPs from after they voted against the government and in favor of legislation to block a no-deal Brexit on 31st October.

Irrespective of their positions on Brexit, Conservative MPs may find Hague’s intervention ironic given his own tenure as party leader was relentlessly dogged by allegations of misjudgment, failure and divisiveness.

Elected at the age of 36 in 1997, he was tasked with rebuilding and revitalizing the party brand, fresh from its worst general election showing of the 20th century. He attempted to present himself as a young, hip individual, attending London’s Notting Hill carnival, claiming to have drunk 14 pints of beer per day as a teenager, and donning baseball caps emblazoned with his name. Such stunts were widely ridiculed as desperate and juvenile, even by his fellow MPs.

​However, a far more serious gaffe occurred in 1999 when he endorsed party veteran and renowned author Jeffrey Archer’s candidacy for the 2000 London Mayoral election. Despite numerous prominent journalists and party figures warning against Archer’s nomination, due to longstanding and recurrent allegations of sexual and financial impropriety on the novelist’s part, Hague repeatedly backed Archer publicly and referred to him as a “candidate of probity and integrity”.

In particular, questions hung over a scandal dating back to 1986, in which Archer had given £2,000 to a prostitute via an intermediary, which she claimed was ‘hush money’ provided to prevent her from exposing the tryst in the press.

Archer took legal action against two papers that published the allegations – The Daily Star and News of the World – claiming in court the cash had been given on a purely philanthropic basis. Despite widespread suspicion he’d committed perjury and perverted the course of justice, Archer won and received substantial damages from both.

​However, in November 1999 the News of the World published allegations made by Ted Francis, a former friend of Archer's, that he had perjured himself. Archer would subsequently be sentenced to four years in prison for his malfeasance, serving half the term.

At the 2001 General Election, the Conservatives won a net total of just one seat, and Hague resigned in short order.