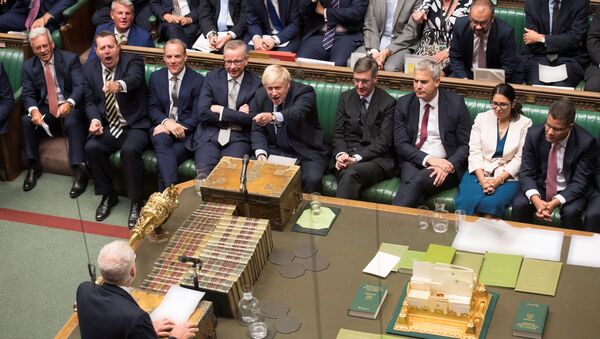 "The Surrender Act has now passed. It has gained Royal Assent. He [Jeremy Corbyn] has done his level best to wreck this country's chances of a successful negotiation," said Johnson directly referring to Labour party leader. "By his own logic and his own argument, he must now back an election."

Referring to other Labour MPs, Johnson added that this, however, is not the case, as most of the oppositionists fear that Corbyn will lose, while "a small and sensible minority don't want it because they're terrified he might actually win."

"I will not ask for another delay," the PM reiterated, "If honourable members want another delay, the only proper way to do this is to ask permission from our masters, the voters."

Boris Johnson continued his attack on MPs who didn't support his proposal to hold a general election to break the Brexit deadlock before 31 October, saying that they had "denied the British people their say".

"While the opposition runs from their duty to those who put us here, they cannot hide forever," Johnson added.

Corbyn later hit back by saying that he wanted to “turf out this reckless government, but we will not walk into his trap”.

Boris Johnson earlier pledged to take Britain out of the European Union by 31 October with or without a deal.

British Parliament is now prorogued until 14 October, with re-opening just a few weeks before the Brexit deadline. On Tuesday the House of Commons rejected Prime Minister Boris Johnson proposal to hold a general election for the second time, meaning that a national vote is now unlikely to happen before November.