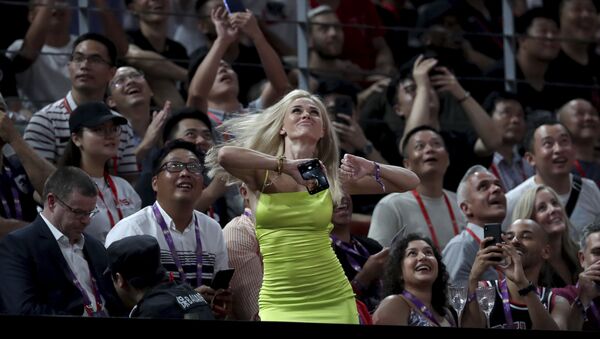 Ex-NBA star Andrew Gaze was seemingly left speechless for a moment after a cameraman at a basketball game between Brazil and the US switched to a blond-haired beauty rooting for the Latin American team in nothing but a small canary outfit.

Ex-basketball star Andrew Gaze’s reaction to one of the fans at a clash between the US and Brazil at the FIBA World Cup, hosted in Shenzhen in China, has prompted a wave of ironic comments on Twitter. The Aussie, who used to play for the San Antonio Spurs, was seemingly caught off-guard when, after having been showing players, the game broadcast suddenly cut to a stunning fan shaking her chest while wearing nothing but a yellow top.

Although he energetically began his commentary with “Well it’s all on the line now for Brazil”, he paused for a moment after saying: “And... the...”

“The support they’re getting from their fans, a whole bunch of them coming all the way to China to see this one, and you need that. You need to generate that emotion and passion in the fans as well”, he continued several seconds later.
The hesitation did not go unnoticed.

An announcer during the USA/Brazil World Cup basketball game was giving analysis about the game until the cameras panned over to a gorgeous female Brazil fan and he fell completely speechless. Watch: https://t.co/AwNCnohs8N

​Some admitted that Gaze was not the only one who was stunned by the breath-taking display.

Gave her a pretty solid gaze myself

​Another commenter drew attention to the “support” part of his comment.

The trouble is the statement "The support they are getting" is a real Freudian slip.

​Supporter may have benefited from some support too.

Lack of support here is outstanding.

​However, the fans’ support did was not enough to help the Brazilian squad, who lost to the US team 89-73. The latter topped Group K and advanced to the quarterfinals, in which they will face France.