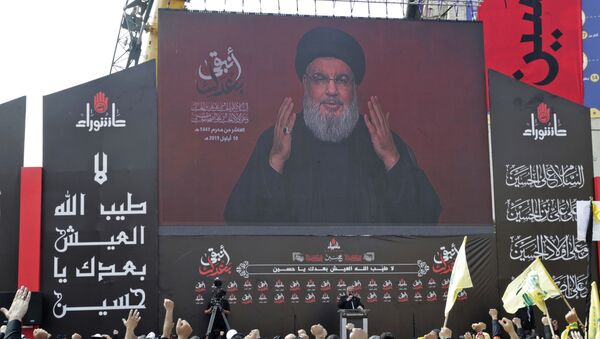 CAIRO (Sputnik) - Secretary-General of Hezbollah Hassan Nasrallah criticised Bahrain on Tuesday, saying that the country has committed a betrayal by supporting Israeli aggression against Lebanon over the past weeks and hosting the US-sponsored economic conference on Israeli-Palestinian peace.

"Bahrain’s regime and its ongoing stabilization [of relations] with the Zionist enemy, [manifesting in] support of all the Zionist attacks over the past weeks against Palestine, Lebanon, Syria and Iraq, as well as its intention to host the economic conference related to the [US-promoted] deal of the century are the ugliest kind of betrayal,” Nasrallah said in a television address on the occasion of Ashura (Day of Remembrance).

In his speech, Nasrallah also emphasized the right of Lebanon to defend its sovereignty and dignity.

"Lebanon respects Resolution 1701 [of the UN Security Council], and Hezbollah is part of the government which also respects it. And in the case if [Israel] attacks Lebanon, it [Lebanon] will respond to this aggression accordingly," he added.

Tensions between Israel and Lebanon flared up in late August following an Israeli drone strike on a media office belonging to the Iran-backed Hezbollah movement near Beirut and attack on Palestinian militant positions in eastern Lebanon.

Earlier this month, Israeli drones dropped flammables on a Lebanese grove near the border in an anti-Hezbollah operation. In response, several anti-tank missiles were launched from Lebanon, targeting facilities in northern Israel, and prompting the Israeli military to fire some 100 projectiles on its neighbour's southern settlements.

Lebanon has repeatedly objected to Israel's anti-Hezbollah operations in its airspace, insisting that they violate the country's sovereignty and UN Security Council Resolution 1701. Israel, in turn, considers Iran- and Lebanon-based Hezbollah to be its key rival in the region and conducts regular air raids against it.

Hezbollah was established in the 1980s as a paramilitary and political organization to end the Israeli occupation of southern Lebanon. When the United States imposed in July sanctions against three Hezbollah officials, who allegedly supported terrorism and acted as Iranian proxies, Bahrain welcomed the move.