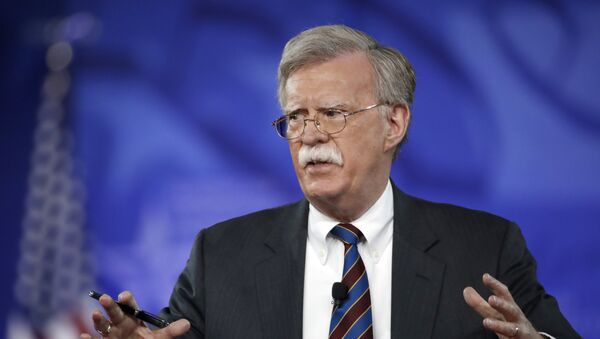 Oleg Burunov
All materialsWrite to the author
Earlier, US President Donald Trump announced the cancellation of peace talks after the recent deadly terrorist attacks in the Afghan capital Kabul. The Taliban warned that the United States would “suffer more than anyone else” for cancelling the negotiations.

US President Donald Trump has taken to Twitter to lash out at media reports, claiming that he "overruled" US Vice President Mike Pence and several advisors on a potential Camp David meeting with the Taliban for Afghan peace talks, which were ultimately cancelled by POTUS.

While slamming the story as "fake news," the president said that "I always think it is good to meet and talk, but in this case I decided not to."

A lot of Fake News is being reported that I overruled the VP and various advisers on a potential Camp David meeting with the Taliban. This Story is False! I always think it is good to meet and talk, but in this case I decided not to. The Dishonest Media likes to create...

"Over the last four days, we have been hitting our Enemy harder than at any time in the last ten years," Trump tweeted, adding that so far, the peace talks are "dead."

We have been serving as policemen in Afghanistan, and that was not meant to be the job of our Great Soldiers, the finest on earth. Over the last four days, we have been hitting our Enemy harder than at any time in the last ten years!

The statement follows a report by NBC News, citing unnamed sources as saying that National Security Adviser John Bolton and Vice President Mike Pence were both strongly opposed to Trump’s plan to meet with Taliban leaders and the Afghan President at Camp David.

The sources claimed that the plan was first discussed about a week ago during a Situation Room gathering, where Bolton’s vehement opposition to the plan was reportedly supported by Pence who specifically made a case against holding the meeting with Taliban leadership at Camp David.

Separately, Bloomberg quoted unnamed officials as saying that Bolton had described a peace deal that Washington is trying to clinch with the Taliban as 'irrelevant', reminding Trump of the agreement’s “potential pitfalls”.

The officials said that Bolton also berated US Special Representative for Afghanistan Reconciliation Zalmay Khalilzad for agreeing to the 'vague' terms offered by the Taliban.

Bolton’s criticism was apparently related to Khalilzad recently tweeting that Washington is “at the threshold of an agreement that will reduce violence and open the door for Afghans to sit together to negotiate an honourable and sustainable peace and a unified, sovereign Afghanistan that does not threaten the United States, its allies, or any other country.”

Cancellation of US’ Peace Talks With Taliban

On Saturday, Trump announced that he had cancelled a secret meeting with Afghanistan’s President Ashraf Ghani as well as the Taliban's leadership at Camp David following recent deadly terrorist attacks in the Afghan capital Kabul.

Unbeknownst to almost everyone, the major Taliban leaders and, separately, the President of Afghanistan, were going to secretly meet with me at Camp David on Sunday. They were coming to the United States tonight. Unfortunately, in order to build false leverage, they admitted to..

“Unfortunately, in order to build false leverage, they [the Taliban] admitted to an attack in Kabul that killed one of our great soldiers, and 11 other people. […]What kind of people would kill so many in order to seemingly strengthen their bargaining position?” Trump tweeted.

....only made it worse! If they cannot agree to a ceasefire during these very important peace talks, and would even kill 12 innocent people, then they probably don’t have the power to negotiate a meaningful agreement anyway. How many more decades are they willing to fight?

US Secretary of State Mike Pompeo, for his part, told CNN that the US is still interested in clinching a peace deal with the Taliban, but that Washington will not made a move until it sees proof of the Taliban delivering on its commitments in line with a potential agreement.

“I think as you saw, if the Taliban don't behave, if they don't deliver […] the President of the United States is not going to reduce the pressure,” Pompeo said.

Taliban Warns US Will Pay the Price

Taliban spokesman Zabihullah Mujahid has, meanwhile, released a statement warning that “the Americans will suffer more than anyone else for cancelling the [peace] talks.”

He cautioned that the talks’ cancellation would result in 'further losses of US lives' and other assets, adding that the US would be forced to return to negotiations sooner or later. According to him, the talks had been proceeding smoothly until Saturday, with the government and the militants agreeing to formal intra-Afghan peace talks on 23 September.

At least 12 people were killed after in a car bomb explosion that ripped through a busy diplomatic area near the US Embassy in Kabul on Thursday, the latest such attack staged by the Taliban in recent days during the group’s peace talks with the US.

Earlier this year, Trump told Time magazine that the US is “doing fine” in Afghanistan and would soon see its troop presence halved to 8,000 soldiers because the US would like “to get out of the Middle East.”

As far as the peace talks with the Taliban are concerned, Washington has repeatedly stressed that it has been seeking for a comprehensive deal, focusing on four main issues — ceasefire, troop withdrawal, intra-Afghan talks and a guarantee of Taliban’s refusal to cooperate with international terrorists.

The Taliban insist that they are not discussing intra-Afghan talks and a ceasefire with the US.