The statement comes after Russian Foreign Minister Sergei Lavrov said earlier on Monday that Moscow and Paris had discussed strategic stability, with Russia reaffirming that it would not deploy missiles anywhere unless US missiles were already in place.

Russian Defence Minister Sergei Shoigu has called for "symmetric steps" to be made in order to prevent an arms race in Europe.

Shoigu's comments came after Moscow and Paris held talks in the 2+2 format during which the two sides specifically discussed strategic stability, according to Russian Foreign Minister Sergei Lavrov.

“We discussed in detail the situation with strategic stability following the US withdrawal from the Intermediate-Range Nuclear Forces Treaty. Our stance on this is well known, it has been repeatedly confirmed by [Russian] President [Vladimir] Putin. We will not deploy such systems in a region unless there are similar American systems there," Lavrov told a press conference on Monday. 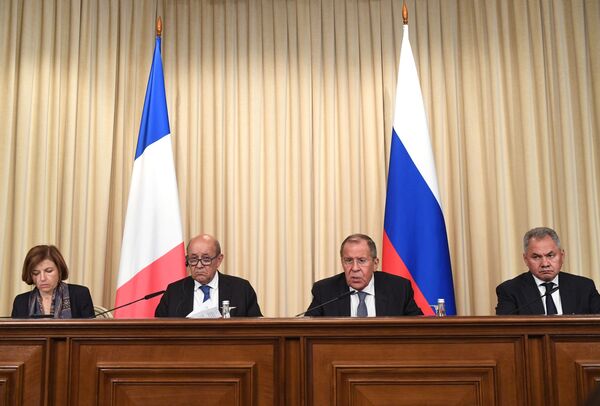 French Foreign Minister Jean-Yves Le Drian, for his part, urged Paris and Moscow to jointly work on creating the architecture of strategic stability in Europe.

“We must definitely work to restore strategic stability in Europe in order to create the new architecture proposed by the French President, since Europe will never be safe if we do not have clear and strong relations with Russia”, he added.

His comments followed Lavrov stating that the US had been preparing tests of the missile, which is non-compliant with the INF Treaty, long before Washington officially exited the accord. According to the minister, the preparations could have begun in October 2018 or even earlier.

"It is, apparently, at that time, maybe even earlier, they began to prepare the tests that were conducted, and which violate the parameters that were in the INF Treaty," Lavrov said.

He spoke after the US tested its first non-INF compliant missile on 18 August, weeks after the country officially withdrew from the agreement. Pentagon spokesman Robert Carver clarified that it was a ground-based MK41 launcher with "a variant of the Tomahawk Land Attack Missile." The projectile travelled over 500 kilometres, a range previously banned by the INF, before hitting its target.

The US announced the commencement of the withdrawal process in February 2019, claiming that Moscow had violated the accord by developing its 9M729 missile, which allegedly operates at banned ranges. Russia denied the accusations and presented the missile for inspection, but the US ignored Moscow's efforts and used its claims as a pretext for its subsequent withdrawal from the treaty.

In response to Washington's decision, Moscow also announced that it would leave the INF Treaty, pointing out that the US had ignored Moscow's own concerns regarding Washington’s compliance with the INF for years.