Pyongyang Calls on US to ‘Quit Current Calculation Method’, Meet for Talks This Month 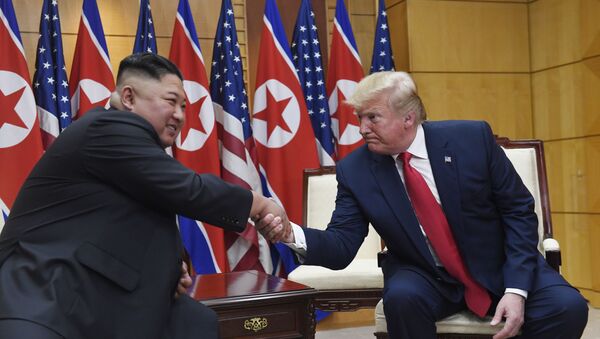 © AP Photo / Susan Walsh
Subscribe
New talks between the US and Democratic People’s Republic of Korea (DPRK) may soon be scheduled, as both sides issued statements showing their willingness to resume denuclearization negotiations cut off in February.

DPRK Vice Foreign Minister Choe Son Hui said in a Monday statement carried by Korea Central News Agency (KCNA) that the socialist country had a “willingness to sit with the US side for comprehensive discussions.”

“Kim Jong Un, chairman of the State Affairs Commission, clarified his stand at the historic Policy Speech in April that it is essential for the US to quit its current calculation method and approach us with new one, and we will wait for a bold decision from the US with patience till the end of this year,” Choe said, noting, “I think the US has since had enough time to find the calculation method that it can share with us.”

“We have willingness to sit with the US side for comprehensive discussions of the issues we have so far taken up at the time and place to be agreed late in September. I believe that the US side will come out with a proposal geared to the interests of the DPRK and the US and based on the calculation method acceptable to us,” the minister continued.

A late September meeting would coincide with the annual United Nations General Assembly in New York. However, while US Secretary of State Mike Pompeo is scheduled to attend, DPRK Foreign Minister Ri Yong Ho is not, Reuters noted.

In comments to the press Monday afternoon, US President Donald Trump told reporters that "we'll see what happens," noting that meetings are always a good thing.

“We know Chairman Kim has continued to make the commitment to denuclearize. We are hopeful that in the coming days, or perhaps weeks, we’ll be back at the negotiating table with them. That’s the best outcome,” Pompeo told ABC’s George Stephanopoulos Sunday on “This Week.”

“We have to make sure that Chairman Kim honors the commitments that he made to President Trump. I think President Trump would be very disappointed if Chairman Kim doesn’t return to the negotiating table or conducts missile tests that are inconsistent with the agreements that they made when the two of them were together these three times,” Pompeo said.

The secretary also noted that Washington was “disappointed” by Kim’s bevy of short-range missile tests in recent months, saying, “We wish that he would stop that,” but made clear that their primary concern was negotiations to end Pyongyang’s nuclear program and prevent a return of long-range missile and nuclear weapons tests.

However, a State Department spokesperson told Reuters following Choe’s comments, "We don't have any meetings to announce at this time.”

Pyongyang has given Pompeo the cold shoulder in recent months, calling him “gangster-like,” not “mature,” and denouncing his “sophistry.”

Ri, who is Choe’s boss, called Pompeo the “diehard toxin of US diplomacy” who employs “hackneyed sanctions rhetoric” in a statement carried by KCNA on August 23. The two men sat opposite one another at the February summit in Hanoi, Vietnam, which fell apart amid intransigence from both sides.

The February summit followed another in Singapore in June 2018, at which Trump and Kim pledged to work toward denuclearization of the Korean Peninsula and the establishment of normal relations between the two countries - relations that have not existed since the end of fighting in the Korean War in 1953. That war, which saw the US and South Korea pitted against the DPRK, backed by China and the USSR, ended only with a ceasefire and the establishment of a demilitarized zone separating the two Koreas, not a permanent peace treaty. However, Pyongyang and Seoul signed an end-of-war declaration in September 2018 amid perhaps the greatest warming of relations between the two countries in their history.

However, the US has orchestrated stiff economic and political sanctions barring trade with the North, leading to shortages of goods, including food, medicine and parts for machines. Pyongyang asked at the Hanoi meeting for some of these to be lowered, in acknowledgement of them having already taken major steps toward ending their nuclear and ballistic missile programs. Washington remained intransigent, insisting no sanctions would be removed until “verifiable” denuclearization had been completed.

Pyongyang maintains its nuclear arsenal, which numbers perhaps a couple dozen warheads, is purely for defensive purposes, and that it would not need such an arsenal if a permanent peace treaty were signed and the 28,500-strong US Forces Korea departed from South Korea.

South Korea welcomed the proposed renewal of talks on Friday. “We look forward to the progress of denuclearization talks in terms of mutual trust and respect between the US and North Korea, culminating in good results,” Ministry of Unification Deputy Spokesperson Kim Eun Han said in response to Ri’s statement, according to the Korea Herald. Tensions have become more strained in recent weeks after Seoul engaged in simulated war games with the US, which Pyongyang viewed as a violation of a previous agreement.

“If the US side fingers again the worn-out scenario which has nothing to do with the new calculation method at the DPRK-US working negotiation to be held with so much effort, the DPRK-US dealings may come to an end,” Choe’s Monday statement warned. In April, Kim made clear that Pyongyang expects an end to the deadlock with Washington by the end of the year - a position he reiterated last month.