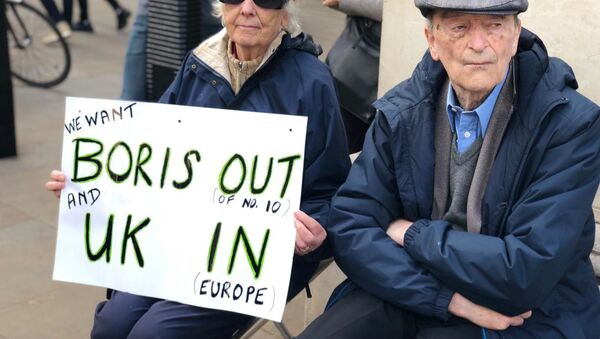 © Sputnik
Subscribe
Le Carre has long been a critic of Brexit, putting his name in May to an open letter in which dozens of authors urged readers to support the European Union in May’s European parliament elections. However, the vote was won in the by Nigel Farage’s newly-launched Brexit Party.

Renowned British spy novelist John Le Carre’s latest book condemns “pig-ignorant” Boris Johnson and the “lunacy” of Brexit, according to an excerpt published in The Guardian.

Set in 2018, Agent Running in the Field – Le Carre’s 25th novel - tells the tale of Nat, a 47-year-old MI5 operative who has serious reservations about the idea of England “as the mother of all democracies”, describing the country as in freefall, with “a minority Tory cabinet of 10th-rates” obsessed with “the sheer bloody lunacy of Brexit”.

.@Time's fall book list, feat. a page-turner about subterfuge and surveillance and the perils of espionage. And also the new John le Carré novel. https://t.co/MX9ybCMyZO pic.twitter.com/X385qMtqgE

​Johnson is still foreign secretary in the book, a position he resigned July 2018 in protest of then-prime minister Theresa May’s Brexit strategy.

“The thing about Le Carre is he’s always been as much at home in Europe as Britain. A man with his experience of the Cold War could not walk away from the divisions in Britain, and between Britain and Europe…After the referendum, there was no choice for him except to look at where we are now,” the author’s editor Mary Mount said.

The book is scheduled for release two weeks prior to 31st October, when the UK is scheduled to leave the bloc.

Le Carre – real name David John Moore Cornwell - became an MI5 operative himself in 1958, before joining MI6 in 1960, working under the cover of Second Secretary at the British Embassy in Bonn, Germany – then the de facto capital of the Federal Republic of Germany. While there, he began writing crime and spy fiction under his famous pseudonym as Foreign Office staff were forbidden to publish under their own names.

He would leave the intelligence services in 1964 to work full-time as a novelist, his intelligence-officer career ended due to the betrayal of British agents' covers by Kim Philby, the famous double agent and member of the 'Cambridge Five' KGB spy ring.