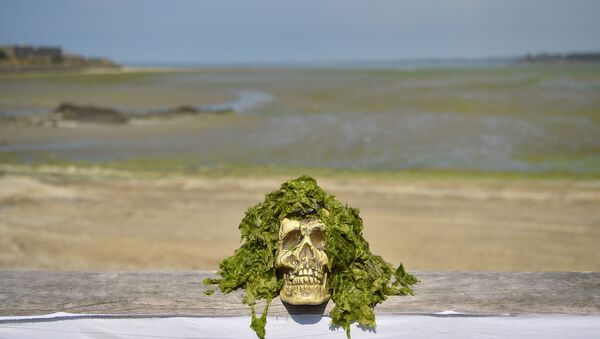 For decades, potentially lethal green algae have amassed in bays on Brittany’s north-western coast, the Guardian reported. Environmentalists say the blossoming of unusually large amounts of green algae is linked to nitrates in fertilisers and waste from the region’s intensive pig, poultry and dairy farming flowing into the river system and entering the sea, providing a great fertilizer for the seaweed.

Moreover, when the algae decompose, pockets of poisonous hydrogen sulfide gases get trapped under its crust, making the slimy seaweed potentially fatal to humans if they step on it. According to Andre Ollivro, former gas technician and environmentalist, the gas “could kill you in seconds.”

The toxic sludge that can lead to loss of consciousness and cardiac arrest has washed up on the shores for decades, but environmentalists say that the problem has worsened this summer due to “exceptional” weather, according to France 24.

“The influx of green algae began very early, there were few storms and June was a relatively wet month, which caused more water to flow from agricultural areas and thus more green algae,” a spokesperson for the Saint-Brieuc town hall told the outlet.

At least two people and dozens of animals have died from inhaling the toxic fumes in the area, though some warn the cases don’t reveal the full scope.

“Around 20 people die on the coast each year, often swept away with tides or currents, but the question is: could some of those people have fainted from toxic gas from seaweed before being swept out? The state has not shed full light on all these issues,” Inès Léraud, who penned an investigative comic book on the scandal, told the Guardian.

Thierry Burlot, a deputy head of environment for the Brittany region who also runs the only refuse centre processing seaweed collected on beaches, said that the situation has become less dramatic as a result of state initiatives that have considerably reduced nitrates in the water system in recent years.

“Brittany has around 2,700km of coastline, and less than 5% of it is affected by this algae phenomenon,” he added. “Fifteen years ago, at the worst point, we would collect 30,000 tonnes of algae a year from certain beaches in the Côtes d’Armor. Now it’s 10,000 a year […] We’re mobilised to do more.”