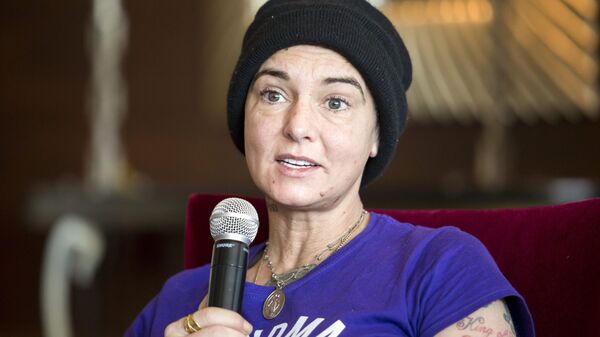 © AP Photo / Balazs Mohai
Subscribe
International
India
Africa
Ilya Tsukanov
All materialsWrite to the author
Last November, shortly after converting to Islam, O’Connor was criticised for saying she “never” wanted to “spend time with white people again (if that’s what non-muslims are called),” and called them “disgusting.”

52-year-old Irish alternative rock singer and songwriter Sinead O’Connor has taken to Twitter to apologise for remarks made last November about “disgusting” “white people,” saying she made the comments while she was “angry and unwell”.

The comments “were not true at the time and they are not true now,” O’Connor, aka Shuhada Davitt, said.

As regards to remarks I made while angry and unwell, about white people... they were not true at the time and they are not true now. I was triggered as a result of islamophobia dumped on me. I apologize for hurt caused. That was one of many crazy tweets lord knows

“I was triggered as a result of islamophobia dumped on me. I apologise for hurt caused,” she added.

On 6 November 2018, the singer had said that she didn’t want to spend time with “white people” ever again, “not for one moment, for any reason,” sparking outrage among some of her fans.

O’Connor made the apology following an appearance on the Late Late Show last week, during which she discussed her Islamic faith, and said that reading the Quran had made her realise that she had “been a Muslim all my life.”

Sinead’s followers were mostly supportive of the singer, accepting the apology and voicing their support for her recovery.

Nice one Sinead . the most challenging part of recovery from a mental health issue is people judging on past behaviour. harder to manage than the health issue itself.

Good to see you back on track. We all struggle! Keep on singing x

Whatever works for you. That's what counts. Good to see you coming out the other side of it and looking well and happy.

However, some users weren’t so quick to forgive and forget, accusing her of “still playing the victim,” suggesting that she had been “brainwashed,” or asking whether she realises that changing her religion does not change her ethnicity.

Just watched the interview. Does she not realise that changing religions doesn’t change her ethnicity? She’s still white. And why does she have a much darker complexion now?

Sinead O’Connor came to prominence in the alternative rock scene starting in the late 1980s, and is best known for her cover of the Prince song ‘Nothing Compares 2 U’, which garnered worldwide acclaim in 1990.

The singer is no stranger to controversy, having demonstratively ripped up a photo of Pope John Paul II during a live appearance on the US sketch comedy show Saturday Night Live in 1992 to protest against the Catholic Church’s pedophilia scandals, which the Church was refusing to own up to at the time. In 2010, she voiced opposition to organised religion as a whole, telling UK media that “God was there before religion,” and would “be there when religion is gone”.

Despite these stances, O’Connor announced that she would be converting to Islam in October 2018, calling it "the natural conclusion of any intelligent theologian’s journey.” During her conversion, she changed her named to Shuhada Davitt. She had previously changed it to Magda Davitt in 2017, saying that decision was based on her desire to free herself of “patriarchal slave names”.

Lots saying I've changed religions more than once. Not so. I was born into Christianity and I changed to Islam. So that's one change. For those who have difficulty counting.