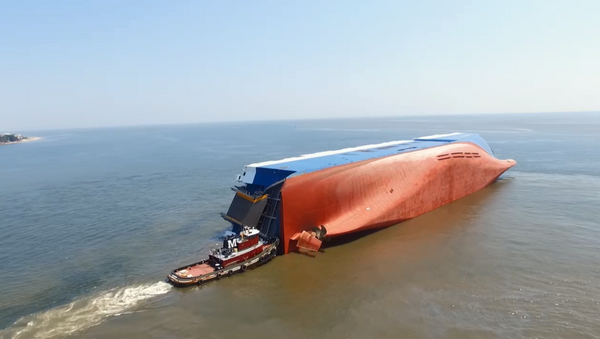 Michael Torres, a resident of Georgia’s Saint Simons Island, on Monday shared new, up-close footage of the capsized cargo ship Golden Ray that he was able to capture with a drone.

According to officials, the vessel capsized in the area early Sunday, with a total of 23 crew members and a pilot onboard. Rescue efforts were briefly paused over concerns related to a fire that had broken out on the 656-foot carrier.

The Seventh District of the United States Coast Guard issued a statement revealing that involved officials are “developing an extraction plan” to rescue four trapped crew members, and that the efforts are a “slow, but safe process.”

The cause of the vessel’s capsizing remains under investigation. The ship channel has been closed off to vessel traffic, and there are presently no indications that pollutants have been released from the ship and into the water.