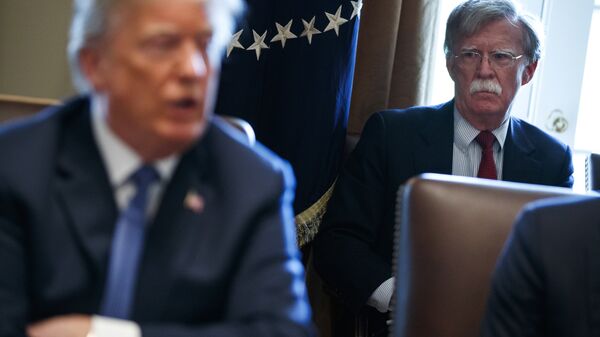 Oleg Burunov
All materialsWrite to the author
Earlier, Trump tweeted that he had decided to cancel a meeting with the Taliban movement's leadership after the group claimed responsibility for staging a terrorist attack in the Afghan capital Kabul which left “12 innocent people” dead, including a US soldier.

US National Security Adviser John Bolton has described a peace agreement that Washington is trying to clinch with the Taliban as irrelevant, reminding President Donald Trump of the deal’s “potential pitfalls”, Bloomberg cited several unnamed sources as saying.

The sources added that Bolton specifically berated US Special Representative for Afghanistan Reconciliation Zalmay Khalilzad for agreeing to terms offered by the Taliban that Bolton claimed were too vague.

He apparently referred to Khalilzad recently tweeting that Washington is “at the threshold of an agreement that will reduce violence and open the door for Afghans to sit together to negotiate an honourable and sustainable peace and a unified, sovereign Afghanistan that does not threaten the United States, its allies, or any other country.”

Bolton’s alleged frustration over the matter comes as Trump announced on Saturday that he had cancelled a secret meeting with Afghanistan’s President Ashraf Ghani as well as the Taliban movement's leadership in Camp David over recent deadly terrorist attacks in the Afghan capital Kabul.

Unbeknownst to almost everyone, the major Taliban leaders and, separately, the President of Afghanistan, were going to secretly meet with me at Camp David on Sunday. They were coming to the United States tonight. Unfortunately, in order to build false leverage, they admitted to..

“They [Taliban leaders] were coming to the United States tonight. Unfortunately, in order to build false leverage, they admitted to an attack in Kabul that killed one of our great soldiers, and 11 other people. I immediately cancelled the meeting and called off peace negotiations. What kind of people would kill so many in order to seemingly strengthen their bargaining position?” Trump tweeted.

....only made it worse! If they cannot agree to a ceasefire during these very important peace talks, and would even kill 12 innocent people, then they probably don’t have the power to negotiate a meaningful agreement anyway. How many more decades are they willing to fight?

On Thursday, at least 12 people were killed after a car bomb exploded in a busy diplomatic area near the US Embassy in Kabul, the latest in a series of such attacks staged by the Taliban in recent days during the group’s talks with the US.

The Afghan government has meanwhile signalled its readiness to cooperate with US counterparts so as to add to a ceasefire agreement with the Taliban. The government urged the group to stop violence and sit down for direct talks with Kabul.

Earlier, Trump claimed that the US is “doing fine” in Afghanistan and will soon see its troops there halved to 8,000 soldiers.

He reiterated that he was always against spending billions of dollars and losing an "unbelievable numbers of lives" on both sides.

Washington has been negotiating a peace deal with the Taliban movement, which would stipulate the withdrawal of foreign troops in exchange for the Taliban's guarantee that it would cut ties to terrorist organisations and ensure that the country would not become a safe haven for terrorists. The Taliban's leaders, in turn, have repeatedly said that they are not discussing intra-Afghan talks or a ceasefire with the US.