Iranian Tanker Sought by US 'Gone to its Destination, Oil Sold' - Tehran 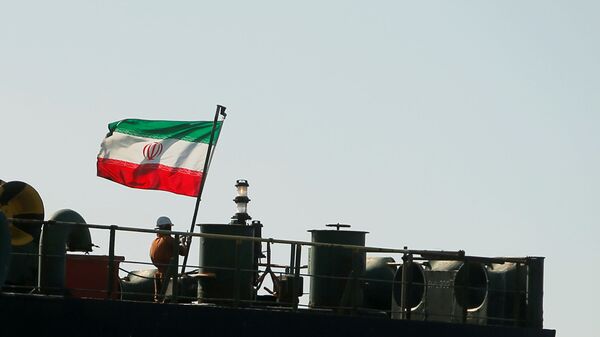 Ilya Tsukanov
All materialsWrite to the author
On Saturday, US National Security Advisor John Bolton posted a satellite image which he said was Iran's Adrian Darya 1 tanker loitering off the coast of Tartus, Syria, and accused Tehran of "lying" about its alleged promise not to send the tanker to Syria after its release by Gibraltar authorities. Tehran says it gave no such commitments.

Iran's Adrian Darya 1 tanker has made it to its destination, and sold its oil, Iranian foreign ministry spokesman Abbas Mousavi has announced.

"The tanker has gone to its destination, the oil has been sold," Mousavi said, speaking to Iranian television on Sunday, his remarks quoted by Reuters.

The spokesman did not clarify whether the ship's crude oil cargo has been delivered, and did not specify the destination country, but did say the ship had docked on the Mediterranean coast.

Mousavi also expressed hope that the Stena Impero, a British-flagged oil tanker seized by Iranian authorities in the Strait of Hormuz in July for allegedly violating maritime rules and colliding with an Iranian fishing boat, would soon be released after going through the necessary legal steps.

"I hope the procedures will be completed soon and this tanker will be released," the spokesman said.

Last week, the press attache from the Russian Embassy in Tehran said seven Stena Impero crew members, including a Russian national, had left Iran. Earlier, Iran said that 16 other crew members had been told to remain aboard so that the vessel could leave port after being released.

On Saturday, Trump National Security Advisor John Bolton posted a satellite image allegedly showing the ship sitting off the coast of Syria on Saturday. Last week, it was reported that the Adrian Darya 1 was travelling somewhere between Cyprus and Syria, with its transponder turned off and its exact location unknown amid US threats to arrest the commercial vessel, and to sanction any country where the ship docks.

Earlier in the week, Iranian Foreign Minister Mohammad Javad Zarif accused the US of resorting to "outright blackmail" after US media revealed that Washington had sought to offer the Adrian Darya 1's captain and the captains of other Iranian commercial vessels cash in exchange for the 'surrender' of their ships to US custody, on penalty of personal sanctions.

Also on Sunday, a US official announced that US would continue its campaign of "maximum pressure" against Iran, and said no waivers would be provided for major importers of Iranian oil.

"We will continue to put pressure on Iran and as President [Trump] said, there will be no waivers of any kind for Iran's oil," US Treasury Secretary for Terrorism and Financial Intelligence Sigal Mandelker said in a statement.

In May, the US scrapped waivers issued to over half a dozen major purchasers of Iranian oil, and threatened to slap sanctions on buyers if they continued to do business with the Islamic Republic. China has been the only major buyer of Iranian oil to ignore the sanctions, although it too has reduced imports to about half of their pre-sanctions levels.

According to Mandelker, Iranian oil sales abroad have dropped substantially thanks to US pressure. The official said the US would continue imposing sanctions on "whoever" buys Iranian crude oil.

The US has repeatedly accused Iran of planning to 'go back on' its alleged commitments not to allow the Adrian Darya 1, previously known as the Grace 1, to sail to Syria following its release from detention in Gibraltar last month. Tehran maintains that it made no promises that its tanker would not head to Syria or any other country, and has vowed to continue to sell oil "to any and all buyers."

The Grace 1 was seized by authorities in Gibraltar in early July after the UK received a tip from the US claiming that the tanker planned to unload its cargo in Syria, in violation of European Union sanctions against the war-torn country. Gibraltar released the ship in mid-August, in defiance of a US request to continue the detention, and the issuance of US warrant to seize the ship.

Since then, the US has sought to prevent the tanker from unloading its cargo anywhere in the Mediterranean region, and recently updated its advisory on Iran sanctions threatening to blacklist any country, company or individual providing refuelling services to vessels "transporting petroleum or petroleum products from Iran."