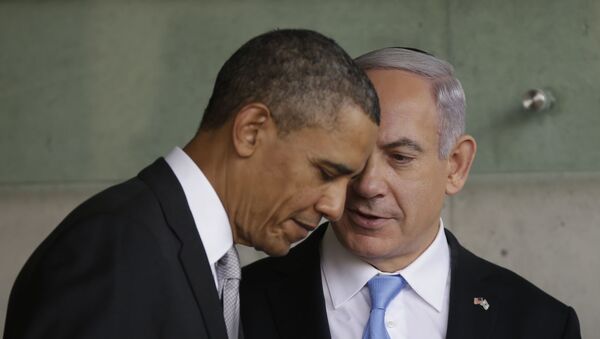 © AP Photo / Pablo Martinez Monsivais
Subscribe
Since Israel was established in 1948, the United States has been its closest ally. Their relationship, however, deteriorated under the Obama administration, which sought to tackle Iran’s nuclear effort through negotiations, while Israeli hawks were purportedly considering a military option.

US spy satellites were keeping track of Israeli military movements near Iran at a time when Benjamin Netanyahu was involved in a behind-the-scenes effort to pressure the Obama administration into pulling off a military strike against Iran, The New York Times Magazine reports.

The Strike That Never Was

American satellites saw Israel launch surveillance drones from bases in Azerbaijan and fly them over Iran’s border, capturing images of Iranian nuclear sites and determining whether they were spotted by Iran’s air defences, according to a Wednesday piece titled “The Secret History of the Push to Strike Iran” and based on interviews with American, Israeli and European officials.

In the summer of 2012, it is understood that the US satellites also detected clusters of Israeli aircraft, apparently making early preparations for an attack against Iran, which was eventually called off.

Fears that Iran, Israel’s nemesis, could be developing nuclear weapons have long lingered over Tel Aviv, despite Iran denying nuclear-weapon ambitions and insisting that its atomic energy programme was solely intended for peaceful purposes.

The Obama administration committed to preventing Iran from obtaining a nuclear weapon and negotiated a landmark agreement in 2015, which limited Iran’s uranium enrichment capacity and stockpile in exchange for the lifting of stringent economic sanctions.

Obama Backs Off, and So Does Netanyahu

However, according to the piece in The New York Times, Netanyahu had plans to carry out a pre-emptive strike against Iran and wanted the United States to join it. The White House eventually decided not to assist in such an operation, but allegedly refrained from standing in Israel’s way as well.

Some officials interviewed by The New York Times have cast doubt on Israel’s plans to strike Iran on its own, however, speculating that Netanyahu and his aides never intended to do so.

The prime minister insisted that the threat of a strike “was not a bluff” and admitted to scrapping the plans only because he could not rally the majority of ministers to his side.

000000
Popular comments
Israel needs to be stopped period. No more money to that cancer.
parkerjoe
6 September 2019, 15:56 GMT8
000000
“The prime minister insisted that the threat of a strike “was not a bluff” and admitted to scrapping the plans only because he could not rally the majority of ministers to his side.” Total BS...since when he needs the majority of his ministers to launch an attack?!
netman
6 September 2019, 16:38 GMT3
000000
Newsfeed
0
New firstOld first
loader
LIVE
Заголовок открываемого материала
Access to the chat has been blocked for violating the rules . You will be able to participate again through:∞. If you do not agree with the blocking, please use the feedback form
The discussion is closed. You can participate in the discussion within 24 hours after the publication of the article.
To participate in the discussion
log in or register
loader
Chats
Заголовок открываемого материала
Worldwide
InternationalEnglishEnglishMundoEspañolSpanish
Europe
DeutschlandDeutschGermanFranceFrançaisFrenchΕλλάδαΕλληνικάGreekItaliaItalianoItalianČeská republikaČeštinaCzechPolskaPolskiPolishСрбиjаСрпскиSerbianLatvijaLatviešuLatvianLietuvaLietuviųLithuanianMoldovaMoldoveneascăMoldavianБеларусьБеларускiBelarusian
Transcaucasia
ԱրմենիաՀայերենArmenianАҧсныАҧсышәалаAbkhazХуссар ИрыстонИронауОssetianსაქართველოქართულიGeorgianAzərbaycanАzərbaycancaAzerbaijani
Middle East
Sputnik عربيArabicArabicTürkiyeTürkçeTurkishSputnik ایرانPersianPersianSputnik افغانستانDariDari
Central Asia
ҚазақстанҚазақ тіліKazakhКыргызстанКыргызчаKyrgyzOʻzbekistonЎзбекчаUzbekТоҷикистонТоҷикӣTajik
East & Southeast Asia
Việt NamTiếng ViệtVietnamese日本日本語Japanese俄罗斯卫星通讯社中文（简体）Chinese (simplified)俄罗斯卫星通讯社中文（繁体）Chinese (traditional)
South America
BrasilPortuguêsPortuguese
NewsfeedBreaking
05:39 GMTAustralian Anti-Lockdown Protesters Clash With Police Amid Coronavirus Outbreak - Photos, Videos
04:40 GMTLive Updates: Germany Reports 8,901 New COVID-19 Cases
04:30 GMTPlaytime is Over! Golden Retriever Won't Pay Bills
04:09 GMTAir France Plane Makes Emergency Landing in Beijing Over Fire on Board, Reports Say
03:51 GMTChina May Direct Its Nuclear Missiles Towards Australia as AUKUS 'Serves US’ Demands' - Report
03:47 GMTFive People Injured, 49 Flights Cancelled in Japan Over Typhoon Chanthu – Reports
03:41 GMTResearchers Find Part of Universe's Missing 'Ordinary' Matter
03:27 GMTVenezuelan Government Says Banco de Venezuela Faced 'Terrorist Attack'
02:16 GMTGerman Politicians Slam University Guidelines to Implement ‘Gender-Neutral’ Language
01:39 GMTThe Last Time the US Gave an Ally Nuclear Technology, France Tried to Quit NATO
01:36 GMTAntarctic Ozone Hole Now 'Larger Than Usual', Covering Entire Continent, Scientists Say
01:22 GMTTrump Allegedly Joked That Jared Kushner Is ‘More Loyal to Israel Than US’
01:15 GMTVogue Releases Video of AOC’s ‘Dress Prep’ for Met Gala
00:25 GMTNo New Date Set for Resumption of Pretrial Hearings of 9/11 Case in Gitmo, Spokesperson Says
00:06 GMTUS Closes Del Rio Port of Entry on Texas-Mexico Border Due to Influx of Migrants
00:03 GMTNew Research Sheds Light on How to Tackle Obesity
YesterdayWhite House Confirms in Touch With France Over Envoy's Recall, Will Work to Resolve Issues
YesterdayTop Senate Defense Panel Republican Says Biden Ultimately Liable for Kabul Drone Strike
YesterdayGantz: Israel Could Accept Return to JCPOA if US Has ‘Plan B’ for Iran’s Nuclear Program
YesterdayUS Judge Denies Giuliani’s Request to Return, Destroy Seized Evidence, Reports Say