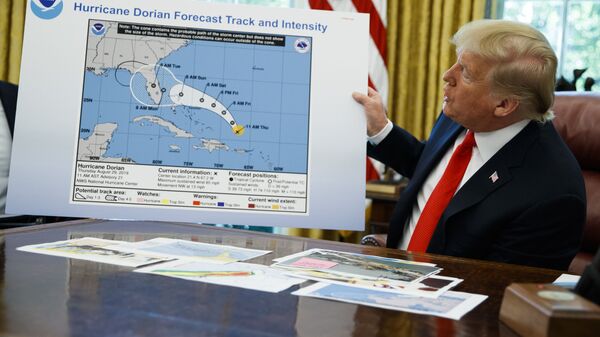 US President Donald Trump has maintained he knew nothing of the Sharpie-altered National Weather Service (NWS) map of Hurricane Dorian’s forecasted path during a Wednesday statement. However, a White House insider has told the Washington Post that the president was behind it all along.

The Wednesday briefing, filmed in the Oval Office, included Trump holding up a visual aid of Dorian’s original projected path, which had the storm’s eye hitting as far as central Florida. However, aside from the map being far out of date - the storm was already making its northerly turn before ever hitting the Sunshine State - a curious addition had been added on the left hand side of the image: a small, hand-written extension of the NWS forecast, reaching out to include southern Alabama. The president had been ridiculed in the preceding days for claiming the storm endangered the state long after forecasts showed a radical departure from earlier projections, taking Dorian far to the east.

“No one else writes like that on a map with a black Sharpie,” an anonymous White House staffer told the Post Thursday.

What a hill to die on!

The revelation is remarkable, since Trump went out of his way the previous day to disavow knowledge that the image he’d held up in the video had been doctored.

“No,” Trump told reporters Wednesday, after they asked him if he knew about the alterations. “I just know, I know Alabama was in the original forecast. They thought they would get it as a piece of it. It was supposed to go - actually we have a better map than that which is going to be presented, where we had many lines going directly, many models, each line being a model, going directly through. And in all cases, Alabama was it.”

As the media frenzy steadily intensified - is there a hurricane rating for Twitterstorms? - Trump continued to fight back, showing early-stage images of forecasts and computer models that said Dorian might hit Alabama and attacking his critics for their sloppy reporting and meteorological skills. However, like a Chinese finger trap, the more he struggled, the tighter the trap became - and the harder-punching the memes got.

Trump has tweeted 11 times about #Sharpiegate since the White House published the video on Twitter Wednesday afternoon.

“The Fake News Media was fixated on the fact that I properly said, at the beginnings of Hurricane Dorian, that in addition to Florida & other states, Alabama may also be grazed or hit,” Trump’s latest, and longest, batch of tweets on Friday said. “They went Crazy, hoping against hope that I made a mistake (which I didn’t). Check out maps. This nonsense has never happened to another President. Four days of corrupt reporting, still without an apology. But there are many things that the Fake News Media has not apologized to me for, like the Witch Hunt, or SpyGate! The LameStream Media and their Democrat partner should start playing it straight. It would be so much better for our Country!”

....This nonsense has never happened to another President. Four days of corrupt reporting, still without an apology. But there are many things that the Fake News Media has not apologized to me for, like the Witch Hunt, or SpyGate! The LameStream Media and their Democrat.....

....partner should start playing it straight. It would be so much better for our Country!

“While speaking to the press last Sunday, the President addressed Hurricane Dorian and its potential impact on multiple states, including Alabama,” Rear Adm. Peter J. Brown, Trump’s homeland security and counterterrorism adviser, said in a Thursday statement. “The President’s comments were based on that morning’s Hurricane Dorian briefing, which included the possibility of tropical storm force winds in southeastern Alabama.”

“There’s no way to know how much time he’s wasted focusing on this,” CNN’s Anderson Cooper lamented on Thursday, noting that very real problems, such as the absolute devastation suffered by the Bahamas and the looming danger the storm posed to the US Atlantic coast, continued to occupy the brainpower of, well, everybody else.

Of course, it’s not as if CNN has been without its own gaffes during this debacle: a Thursday morning broadcast mislabeled Alabama as Mississippi for a brief period of time, prompting conservatives to leap at the opportunity to strike back at the network.

Poor Alabama, they can’t catch a break! At least CNN admitted their mistake and corrected it, though.

Some meteorologists have noted that in altering a weather forecast, the president probably broke a 1948 federal law prohibiting giving false forecasts, the punishment for which includes both fines and jail time.

Trump’s love of the Sharpie-brand permanent marker is no joke: in the premiere episode of HBO’s “Axios” miniseries, which aired on November 4, 2018, Trump waxed lyrical about the writing utensil, which he’s been spotting signing official documents with.

"I was signing documents with a very expensive pen, and it didn't write well," Trump said. "It was a horrible pen, and it was extremely expensive," he added, referring to the White House’s standard pens.

"And then I started using just a Sharpie, and I said to myself, ‘Well wait a minute, this much writes much better, and this cost almost nothing,’” Trump said. "So, I called up the folks at Sharpie and I said, 'Do me a favor, can you make the pen in black? Can you make it look rich?'"

Trump then pulled a Sharpie from his pocket, showing that not only had the company complied with his request, it had even put his unmistakable - but illegible - signature on the side.

However, you can count on the businessman to leap when there’s money to be made: the Trump 2020 reelection campaign has begun selling custom Trump Sharpie permanent markers with Trump’s John Hancock to willing customers.

​“Buy the official Trump marker, which is different than every other marker on the market, because this one has the special ability to drive @CNN and the rest of the fake news crazy! #KeepMarkersGreat,” Brad Parscale, Trump’s campaign manager, tweeted Friday morning.

In a statement Friday evening, the National Oceanographic and Atmospheric Administration (NOAA), which oversees the National Weather Service and National Hurricane Center, issued a statement retracting its Wednesday rebuttal of Trump's claims.

"From Wednesday, August 28, through Monday, September 2, the information provided by NOAA and the National Hurricane Center to President Trump and the wider public demonstrated that tropical-storm-force winds from Hurricane Dorian could impact Alabama. This is clearly demonstrated in Hurricane Advisories #15 through #41, which can be viewed at the following link," the statement reads. "The Birmingham National Weather Service’s Sunday morning tweet spoke in absolute terms that were inconsistent with probabilities from the best forecast products available at the time."