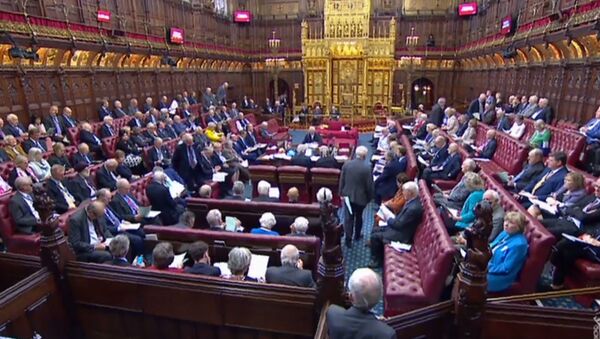 UK opposition parties have agreed to protest against Prime Minister Boris Johnson's plan for a snap election and do not want it to take place before the Brexit deadline date of 31 October.

On Wednesday, the parliament rejected Boris Johnson's call for an election to be held on 15 October.

After completing the committee and report stage as well as the bill’s third reading by 17:00 local time on Friday, the House of Lords will send it back to the House of Commons, where MPs will vote on it again on Monday.

On Wednesday, the House of Commons rejected a snap general election, approving a so-called Benn Bill, which proposes that the government can’t withdraw from the European Union on 31 October without having an agreement with Brussels.

UK Prime Minister Boris Johnson has repeatedly stated that he is determined to leave the EU by 31 October, with or without a deal.

The upper chamber of the British parliament, the House of Lords, has approved a bill which would block a no-deal Brexit at the end of October by forcing Prime Minister Boris Johnson to seek a delay to Britain's withdrawal from the EU.

The legislation requires the prime minister to ask for a three-month extension to the country's EU membership if parliament has not backed a deal or agreed to leave without a deal by 19 October.

The bill now is due to be signed into law by the Queen on Monday.

Boris Johnson said that he was not willing to contemplate resigning.

London High Court has said that the challenge against the suspension of parliament can be immediately taken to the Supreme Court on appeal, BBC reported.

"The situation in Britain is quite a mess now, we don't know what is happening there. It seems pretty obvious now that we are not getting Brexit with agreement," Prime Minister Antti Rinne said.

Jeremy Corbyn will hold a conference call with other opposition leaders on Friday to discuss plans to prevent a no-deal Brexit and how to vote on Monday on the government's bid for an election.