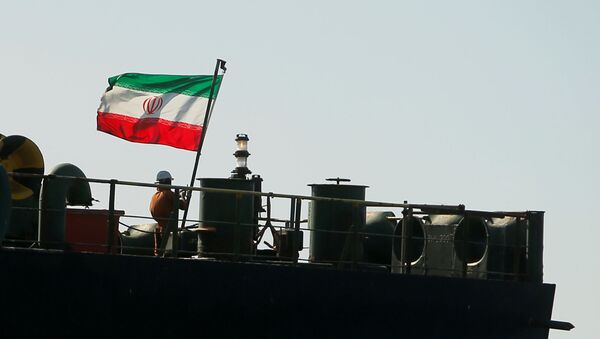 © REUTERS / JON NAZCA
Subscribe
Earlier, the Treasury Department slapped sanctions on entities, ships and individuals with alleged links to Iran’s Islamic Revolutionary Guard Corps, saying their provision of tens of millions of dollars’ worth of oil to Syria was in breach of sanctions against the war-torn country.

The US Treasury has updated its advisory on Iran sanctions, threatening to blacklist any country, company or individual providing refueling services to vessels “transporting petroleum or petroleum products from Iran.”

According to the Treasury’s Office of Foreign Assets Control, “the bunkering by non-US persons of an Iranian vessel that has been identified as blocked property of an Iranian person…and the making of related payments for these bunkering services – risk being designated themselves”.

(‘Bunkering’ is the technical term for the supply of fuel for use by ships.)

The sanctions update follows a move by the US Treasury last Friday to sanction the Adrian Darya 1, the Iranian oil tanker which the US has threatened to seize as part of its broader campaign of “maximum pressure” against Iranian oil exports. The US previously warned that it would consider any assistance rendered to the ship as support for a terrorist group.

Earlier this week, a US State Department spokesperson admitted to US media that the US had effectively offered to bribe the captains of Iranian vessels who agreed to surrender their ships to the US in exchange for cash.

On Wednesday, the Financial Times reported that the US’s special representative on Iran had offered the Indian national captain of the Adrian Darya 1 a choice – either cash for the surrender of his ship, or sanctions.

Iranian Foreign Minister Mohammad Javad Zarif blasted the report, calling it an attempt at “outright blackmail” following the alleged failure of a US policy of “piracy” against Iranian ships.

US officials reportedly contacted the captains of about a dozen Iranian vessels in a bid to enforce unilateral US sanctions against the Islamic Republic.

The Adrian Darya 1, formerly called the Grace 1, was seized by authorities in Gibraltar in earlier July after receiving a hot tip from the US alleging that the ship was attempting to deliver fuel to Syria, in violation of EU sanctions. Gibraltar released the ship last month, despite US complaints, prompting Washington to issue an international arrest warrant against the Adrian Darya 1 and its cargo.

US Military Has 'No Plan' to Seize Iranian Tanker

The Iranian vessel is presently reported be loitering somewhere between Cyprus and Syria, its final destination unknown.

On Thursday, US Secretary of Defence Mark Esper denied that the US was considering seizing the Iranian oil tanker, saying he had “no plan right now sitting on [his] desk to do such a thing”.

Iran has vowed to continue exporting its crude oil in spite of US sanctions threats, with Zarif telling US Secretary of State Mike Pompeo last week to “stop nagging” and saying Iran would continue to sell oil to “any and all buyers”, whether Washington likes it or not.

Tensions between Iran and the United States began escalating in 2018, after the Trump administration unilaterally withdrew from the 2015 Iran nuclear deal and slapped tough banking and energy sanctions on Tehran. In May 2019, the US scrapped sanctions waivers on major traditional importers of Iranian oil, including China, India, South Korea, and Japan, among others. Apart from China, which has continued its imports, albeit at a reduced level, most of Iran’s other major traditional energy customers have folded to US pressure. Iran has responded to the US sanctions by abandoning some of its commitments to the nuclear deal every 60 days unless its European signatories are able to ensure Iran’s interests under the agreement.