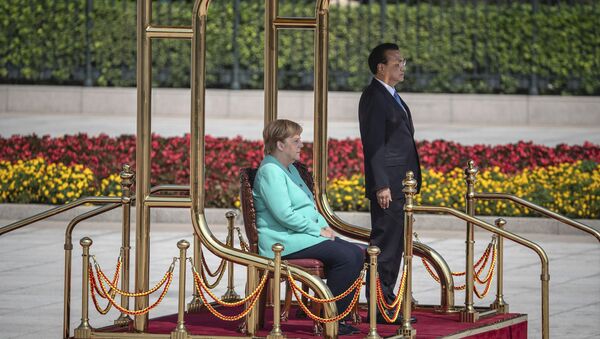 © AP Photo / Roman Pilipey
Subscribe
International
India
Africa
German Chancellor Angela Merkel, who is on a visit to China, and Li Keqiang, Prime Minister of the State Council of the People's Republic of China, stayed seated during the German national anthem at the official welcoming ceremony on Friday.

The official welcome ceremony was held, in accordance with tradition, in the very centre of Beijing - in the square in front of the House of National Assemblies amid almost-30-degree (Celsius) heat. Angela Merkel arrived at the ceremony in a motorcade of famous Hongqi cars, made for the highest-ranking Chinese officials; at the square she was met by Li Keqiang.

The journalists paid special attention to the state of health of the Chancellor, but judging by her appearance it was clear that in Beijing she was doing well.

The heads of government of the two countries traditionally greeted the German and Chinese delegations, after which they briskly walked around the red carpet paths of the guard of honour and a military band.