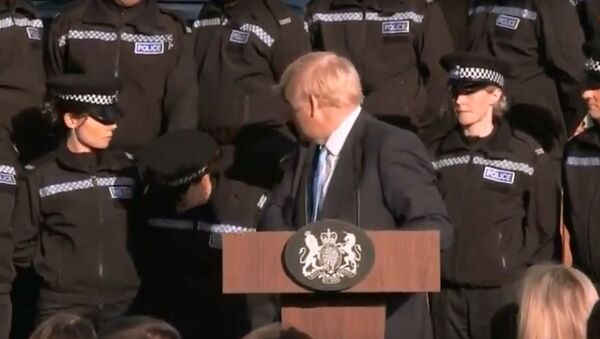 Johnson travelled to Wakefield on 5 September in order to deliver a speech on the current deadlock in the UK Parliament after it voted against the PM’s agenda to take Britain out of the EU by 31 October, even if no deal is in place.

While Johnson was addressing a question about Jeremy Corbyn’s potential distrust in the PM’s ability to hold elections before going to Brussels on 17 October, a policewoman who was standing just behind him for his almost hour-long speech suddenly started to shake visibly and had to sit down, apparently in order to prevent herself from collapsing.

Johnson noticed that the officer was not feeling very well and turned to her, saying “don’t worry I am going to be done very soon”.

However, his remark didn't have an effect, and after Johnson turned to her a second time, now asking “are you alright?” the poor woman had no other option but to sit down.

“I am so sorry, I think that’s a signal for me to wind up”, the British PM said, promptly finishing his speech.