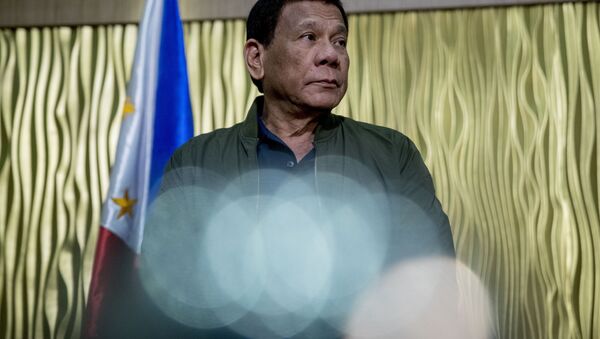 © AP Photo / Andrew Harnik
Subscribe
Rodrigo Duterte travelled to China last week to meet President Xi Jinping and discuss the joint development of offshore oil and gas resources. However, the South China Sea dispute came up, including the 2016 arbitral ruling that concluded there was no legal basis for China’s historical claims to certain areas of the waters.

Philippine President Rodrigo Duterte has revealed details of his talks with his Chinese counterpart Xi Jinping about claims to part of the South China Sea during a recent trip to China. According to Duterte, cited by the South China Morning Post, the Chinese president said: “You know, our statement was: ‘We will not budge’. We don’t want to discuss that because it’s ours. We own the property. Why should we talk to you?”

The Philippine head of state suggested that while he remained firm, he did not pressure his counterpart, citing his stress from the protests in Hong Kong.

“Out of courtesy, I said: ‘Well, I will not, maybe, insist on your answer now. I am not satisfied with your answer, but I will not ask for any other answer. I’ll just remain where I am, where I started, considering that you are under stress by the incidents in Hong Kong’”, Duterte recalled his response.

However, he declined to outline his other moves on the issue, when a journalist asked him about it.

“If you can help by suggesting. Are there any other suggestions? Or have you heard of any sane solution short of going to war with China saying ‘we will not budge?’” he replied, the SCMP reports.

At the same time, Foreign Secretary Teodoro Locsin Jr. denied that the Philippine president was apologetic during the talks.

“The report that the president was apologetic in raising the arbitral award, that’s a total fabrication, in every aspect a complete lie”, he said.

During Duterte’s trip to China, dedicated to economic cooperation, Xi called on the Philippines to take a “bigger step” toward the joint development of offshore oil and gas resources, saying that greater cooperation in this area would be possible if the two countries were to “put aside” their territorial dispute in the South China Sea, Xinhua reported.

Duterte’s spokesman Salvador Panelo confirmed that the two leaders brought up the South China Sea dispute, including the 2016 ruling by the Permanent Court of Arbitration in The Hague, which concluded that there was no legal basis for China’s historical claims over vast swathes of the sea.

Duterte raised the ruling “unequivocally, assertively but friendly” with Xi, Panelo said, according to Reuters, with the Chinese president reportedly responding that Beijing does not recognise The Hague’s recommendations. Nevertheless, the two sides recognised “the importance of self-restraint and respect for freedom of navigation in –and overflight above – the South China Sea”, he said.

Duterte has been criticised at home, including by his own vice president, for “selling out” to China amid a warming of relations under his tenure as president. Last month, Philippine Defence Secretary Delfin Lorenzana accused China of “bullying” smaller claimant states such as the Philippines in the South China Sea. Duterte has rejected such criticism, saying that any conflict in the South China Sea could spark a major war with China, in which the Philippine military would be “decimated.”

Along with China and the Philippines, Brunei, Malaysia, Vietnam, and Taiwan also lay claim to part of the South China Sea. China controls the vast majority of the sea area and has established military outposts and air bases in the region by building artificial islands. Beijing and Manila have conflicting claims over Reed Bank, an 8,850 sq. km area of the South China Sea northeast of the Spratly Islands, west of the Philippines where much of the region’s known oil and gas reserves are based, and where Chinese and Philippine vessels have clashed repeatedly over fishing rights.