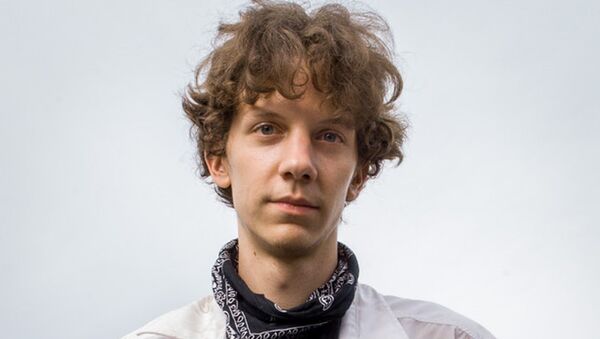 © Jeremy Hammond Support Committee
Subscribe
International
India
Africa
Imprisoned hacktivist Jeremy Hammond has been transported to Alexandria, Virginia, to appear before the same grand jury that jailed Chelsea Manning earlier this year. One journalist told Sputnik the US government has all the information it needs, but is waging a “fishing expedition” to break the activists and try to dismantle WikiLeaks.

Hammond hacked many institutions over the years, from police forces to corporations - actions he viewed as “civil disobedience and direct actions, basically, that they were in line with his principles of community and equality that have guided him in his life, and he had basically targeted high-profile corporations and government institutions,” Kevin Gosztola, a writer for Shadowproof and co-host of the podcast “Unauthorized Disclosure,” told Radio Sputnik’s Loud and Clear Wednesday.

“He knew it was against the law, he knew that it could get him into trouble, but he was doing it because he wanted to expose and confront injustice.”

Hammond was imprisoned for 10 years by a federal court in 2013 after he pleaded guilty to hacking the private intelligence firm Stratfor in 2011 and publishing the stolen information via WikiLeaks, taking a deal that gave him immunity from further prosecution. However, his recent transportation from the Federal Correctional Institution Milan in Michigan to the William G. Truesdale Adult Detention Center in Alexandria signals a deeper plan is afoot.

Manning, the former US Army intelligence analyst who leaked classified US government files via WikiLeaks in 2009 demonstrating a coverup of US war crimes in Iraq and Afghanistan, is jailed in the same town by the same grand jury before which Hammond is now called to testify.

“Given the secrecy of grand jury proceedings, we don’t know the nature or scope of the grand jury’s investigation. However, our assumption is that this is the same grand jury that Chelsea Manning is currently being incarcerated for refusing to testify before,” a statement by the Jeremy Hammond Support Committee noted.

“The government’s effort to try to compel Jeremy to testify is punitive and mean-spirited. Jeremy has spent nearly 10 years in prison because of his commitment to his firmly held beliefs. There is no way that he would ever testify before a grand jury. The government knew this when they gave him immunity in every federal jurisdiction in exchange for his guilty plea,” the group added.

“There’s a similarity between what he’s doing and what some whistleblowers do,” Gosztola said Wednesday. “So there’s been an affinity between the sort of ‘hacktivism’ that he engaged in and, I think, some of the whistleblower community out there, in the sense that it’s all about trying to get a better sense of how the security apparatus is being run in the United States.”

However, Hector Xavier Monsegur, an FBI informant who went by the pseudonym of “Sabu,” was part of the hacktivist group AntiSec along with Hammond, and there to encourage him to commit these acts, carefully documenting Hammond’s words and moves, including the lead-up to the Stratfor hack.

“Jeremy hasn’t talked about this part of what happened,” Gosztola noted. Hammond gave a long sentencing statement in 2013 in which he discussed much of what he’d done over the years and why he had carried out those attacks. “He didn’t really talk about the interaction with WikiLeaks associates or people, the accounts, the way in which the information was submitted - that’s not in his statement to the court.”

“But what’s important is that it’s actually been written about and detailed to some extent by Gabriella Coleman, who is this scholar who did a lot of work on Anonymous, the hacktivist group, and the different things that went on - particularly in the era between 2008-2009 all the way on to like, 2013-2014,” Gosztola told hosts John Kiriakou and Brian Becker.

“He says that he told Gabriella that, when he talked to WikiLeaks, he first asked them to authenticate the leak by pasting them some samples, which he did, but then, they didn’t ask who I was or really how I got access to it, but I told them voluntarily that I was working with AntiSec … and that he had hacked Stratfor,” Gosztola said, loosely reading from Coleman’s 2014 book “Hacker, Hoaxer, Whistleblower, Spy: The Many Faces of Anonymous.”

“When Sabu found out, he insisted on dealing with [WikiLeaks founder Julian] Assange, personally. After all, he told Hammond, he was already in contact with Assange’s trusted assistant ‘Q,’” Coleman wrote. Gosztola further noted that Sabu wanted WikiLeaks to pay for the leak, making it a prosecutable crime for the group to receive the files - a gambit that failed.

Gosztola noted a second FBI informant in the group, Sigurdur “Siggi” Thordarson, was “also handing thousands of WikiLeaks chats and documents over to law enforcement in the process.”

“The overall point that needs to be made is that not only are we hauling in all of these people, forcing them to answer questions, but you see this in Chelsea Manning’s case, you see this in Jeremy Hammond’s case: the government has all of the information it could possibly need or that could possibly exist in order to bring any sort of crime,” Gosztola told Sputnik. “There’s just so much information involved in the court martial record … that is a whole universe of information that the FBI is aware of.”

“So, FBI analysts and FBI agents have a firm grasp on what Jeremy Hammond allegedly did with WikiLeaks, especially in the submission process, and they know how WikiLeaks published the information, and they know exactly whether there was a crime that was committed that anybody could be prosecuted for, or whether they did as they normally do, and did their due diligence, and abided by the same process that any journalist does when they’re releasing information that was allegedly stolen or leaked. Because that’s what WikLeaks has done all along.”

“So far, the government has yet to put forward any firm example of WikiLeaks committing a crime when they published information, and that’s what they’re doing: they’re on a fishing expedition to force Jeremy Hammond or Chelsea Manning to cave, to recant, to change their story, to turn against people at WikiLeaks and to give them some kind of a sound bite or a quote or something that they can use and go after Julian Assange and other people,” Gosztola said.

Gosztola noted that the fact that Hammond was being sent to Alexandria suggests that “it isn’t just about getting Julian Assange anymore. That, in fact, we might have a larger confirmation with this that they are going after other people that were involved in the publication. So in that sense, your viewpoints about Julian Assange, and whether or not he’s been a good person, no longer matter, because we’re talking about dismantling an entire media organization.”